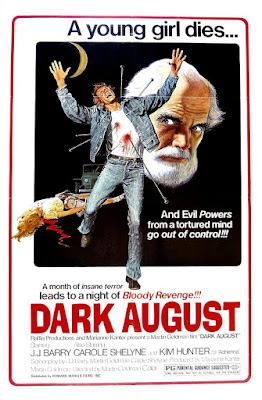 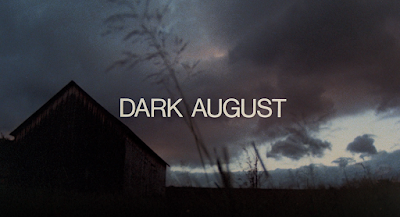 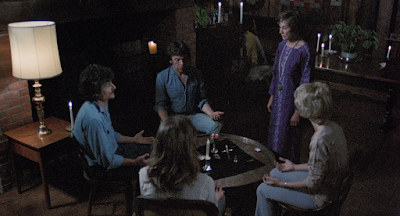 Another one rescued from the VHS only domain this low-key thriller mixing witchcraft, spiritualism and New England folk-horror was for me the highlight of Arrow's American Horror Project Vol. 2. Written (along with J.J. Berry) and directed by Martin Goldman (who had been  a NYC ad-man), it's a wonderfully creepy little film that relays on mood and suggestion rather than shocks to carry itself along and is one of those films that can stick in ones craw long after your viewing.
After a combination of a messy break-up with his wife and a heavy bout of mid-life crisis New Yorker Sal Devito (J.J. Berry from HARPER VALLEY P.T.A. and a semi-regular on TV's BARNEY MILLER) heads off for the comfy confines of rural Stow, VT to begin a relationship with local art gallery owner Jackie (his real life wife Carolyn Barry) and to pursue an artistic career in painting (along with it would seem a dream of wearing denim from head to toe). Living with Carolyn, he begins building a studio in the backyard and has in a buddy another refuge from the big city, Theo (Frank Bongiorno THE FIRST DEADLY SIN) an ex-lawyer and now similar denim-clad potter.
Sal seems like he doesn't quite fit in with the small town vibe and already carrying around a load of guilt from abandoning his wife and kids his life get further complicated when he mistakenly runs over & kills the young granddaughter of a local hermit/quasi-warlock (William Robertson CHRISTMAS EVIL). We only see the accident through Sal's flashbacks which he remembers as clearly being not his fault (with the police coming to same conclusion we learn), however the girl's grandfather sees things differently. The grandfather invokes a black magic curse upon Sal which leads him to seeing an ominous hooded figure lurking in the woods aling with accidents befalling himself and those around him including a bloody accident with a handsaw at his studio construction site. 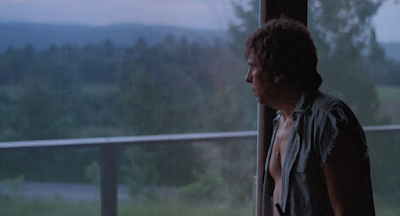 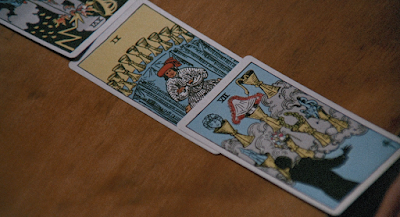 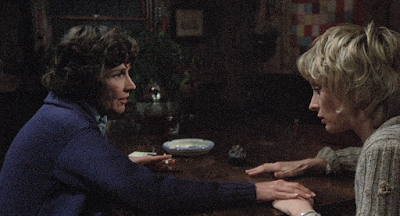 Looking for answers Sal consents to a Tarot card reading done by Theo's wife Lesley (Kate McKeown SWEET KILL) who foretells looming danger in his future and in turn she refers him to local white witch/spiritualist Adrianna Putman (Academy Award winner Kim Hunter) who advises Sal in breaking the curse that requires him to take such drastic steps as burning down his studio.
At its core, a New England-based version of M.R. James classic English ghost story Casting The Runes and it's later Jacques Tourneur directed NIGHT OF THE DEMON film adaption, DARK AUGUST is reliant on mood and creeping dread. Although a PG rating, it is however a 70's PG rating, which means a few splashes of blood and some fleeting nudity. The climax of the film gets a bit heavy handed (especially if you're an animal lover) and is kind of head-scratching seeming to be more gimmick driven then the proceeding atmosphere of the film.
Although he was in his 40's at the time of filming Berry's Sal is stated in the course of the film to being 38 which fits in more with his fear of encroaching middle-age. While he also feels at guilt in regards to the accident  he also argues with his wife back in NYC (showing he really hasn't left that life behind) and gets into a heated phone call with a client from his "previous life" in regards to some commercial art jobs he still has from his days in the 9 to 5 world. all of which weigh heavily on him which lead to bad decisions such as confronting the dead child's grandfather and practically begging for forgiveness. 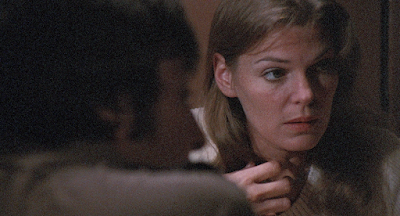 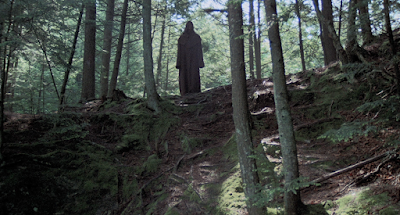 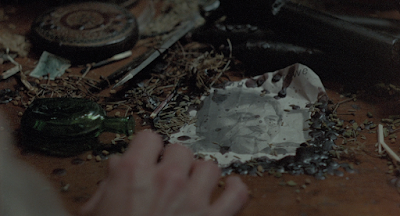 There's also a get-back-nature trend of the period although here it's all involving older middle-aged men which while Sal's friend Theo seems comfortable with his new life, Sal himself seems like a fish out of water in the small Vermont town. Although he comes across as likeable guy he shows a darker side at some points, as he takes to poping tranquilzers and wondering around the house with a shotgun. The real-life marriage between he and Carolyn Barry helps as there seems to be a real spark between them and their lovemaking scene isn't filmed for erotic content, but just as a normal middle-aged couple in bed.
Kim Hunter has a small but important role in the film and as an Oscar winner from A STREETCAR NAMED DESIRE it was probably quite a coup for a small production to land her.  She's quite good in her small but meaningful role and her presence adds quite a bit of gravitas here. Best known at the time for her role as Zira in PLANET OF THE APES from 1968 she had a lifelong interest in spiritualism which is most likely what drew her to the part and according to the director commentary on the Arrow release she took an active part in the film's promotion doing press appearances in Vermont.
A regional horror film through and through the film makes great use of its Vermont locations using all piratical sets from actual houses and commercial buildings in Stowe. The cinematography by Richard E. Brooks (BLOOD RAGE and THE CONCERT FOR BANGLADESH) has a beautiful late-summer green & sunny New England feel to with shots of the forbidding looking distant mountains bringing a Lovecraft atmosphere. There is many shots of people gazing through windows which brings to mind Robert Altman's work (particularly IMAGES from 1972). Except for the horror elements the film is a commercial for rural Vermont and although I've never been there, it's nice to think that maybe Stowe is still the folksy little artist village as shown here.
As included in the American Horror Project Vol. 2 box, thee Arrow Blu in addition to a commentary by director/co-writer Martin Goldman also has a wonderful documentary by comic artist Stephen R. Bissette titled The Hills Are Alive: Dark August and Vermont Horror which covers the entire spectrum of Vermont genre film making & folklore. 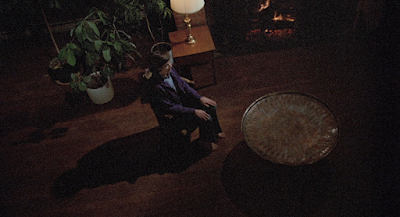 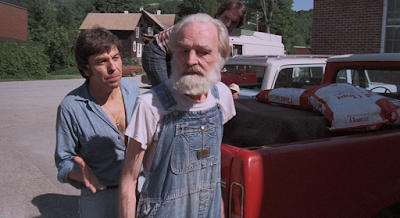 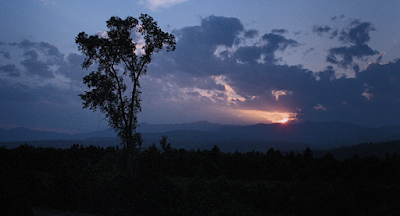 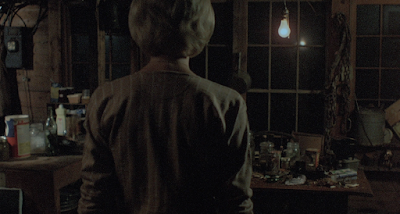 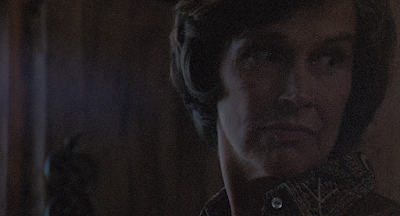 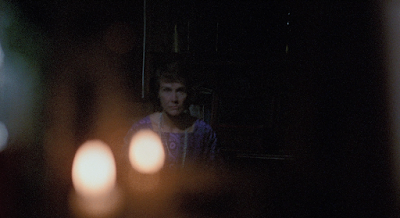 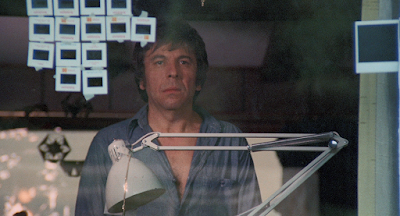 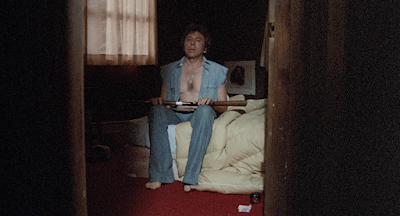 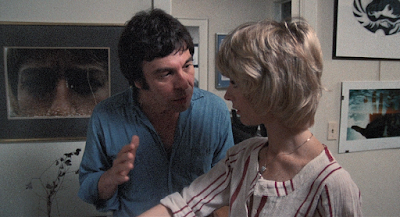 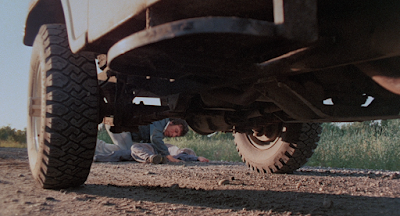