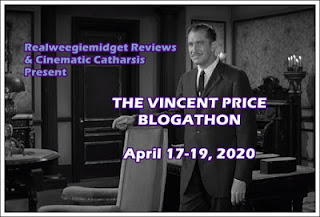 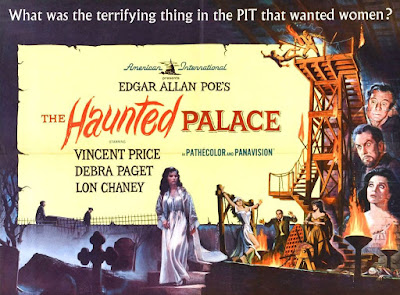 "…While, like a ghastly rapid river, Through the pale door,
a hideous throng rush out forever and laugh – But smile no more"

Although cinematically placed in Roger Corman's "Poe" cycle for A.I.P. (and marketed as such by A.I.P. who by this time were highly attuned to the cash cow the series had become) 1963's THE HAUNTED PALACE is based (however nominally) on the H.P. Lovecraft novella The Case Of Charles Dexter Ward with Price narrating the closing verses of the Poe poem that lends itself to the film's title.
Written by Charles Beaumont (Rod Serling's THE TWILIGHT ZONE) the story while being saddled with Poe references, based upon a Lovecraft story and with a script by Beaumont does sometimes has the feel of a mix of different cooks, none of which are fully developed. In interviews, Roger Corman has bemoaned the fact that he was forced to link Poe to all these projects and that he was looking forward to doing a Lovecraft adaption. The film itself is a beautiful looking production with Floyd Crosby's cinematography (HOUSE OF USHER), art direction by Daniel Haller (THE DUNWICH HORROR) and set direction by Harry Reif (PANIC IN YERO ZERO) all lending themselves to a production that's Gothic eye candy all done in somber browns & blacks, with mist-shrouded matte paintings and gnarly trees.

Coming 6th in the series (after the comedic THE RAVEN from earlier in 1963, THE HAUNTED PALACE was the last of the series to be filmed in America and coming in the latter half of the series it benefits from the studios slowly up ticking budget for each film and although still technically a "B" picture it has the sumptuous look that Corman and his crew brought to these films. Although all the Poe films always had some adult themes lurking just under the surface, THE HAUNTED PALACE brings these more to the forefront with rape and women being possessed in order to breed with otherworldly entities. The film is also the first theatrical picture to directly reference Lovecraft with such cosmic horrors such as Elder Gods, Cthulhu, and Yog-Sothoth along with the town of Arkam all being mentioned. It contains the first utterance of the fabled Necronomicon (by the mad Arab Abdul Alhazred) with the book being shown on-screen in its film debut.
Like all the Poe films, THE HAUNTED PALACE opens with some atmospheric credits (designed by Armondo Linus Acosta THE YOUNG RACERS) as a spider spins a web across a black screen with the web moving over the credits. A group on angry townsfolk are gathered in a local tavern (although we're never given a specific year we're led to believe the films opening narration takes place in the mid-1700s before jumping ahead to the next century for the remainder of the film) and they're mounting angry with local warlock Joseph Curwen (Vincent Price) comes to a head when Edgar Weeden's (Leo V. Gordon TOBRUK) wife is wondering off in a trance to Dexter's castle where she is to be indoctrinated into some evil proceedings. Doing what townfolks do best in this type of situation they gather the pitchforks and torches and proceed to the castle where they take Ward and burn him at the stake. Like all good warlocks (and witches) he proceeds to invoke a curse upon the townfolks and their descendants as a thunderstorm rages overhead.

Flash forward 110 years and Curwen's great-grandson Charles Dexter Ward (again Price) and his wife Ann (Debra Paget TALES OF TERROR in her last theatrical role) arrive in Arkam to claim their inheritance of the Curwen castle. Stopping in the Burning Man Tavern they come across the same surly group of townsfolk (in fact the exact same as they're played by the same actors portraying the original mob's relatives). Among them are a gaggle of familiar character faces including above mentioned Leo V. Gordon along with Elisha Cook Jr. (THE MALTESE FALCON), John Dierkes (THE ALAMO) and ubiquitous TV presence Frank Maxwell (MR. MAJESTYK). Finding them not too receptive to his looking to settle in the Dexter house, the couple proceeds to newly inherited adobe with only Maxwell's doctor character showing them some friendship. There's also a sequence showing the physically deformed offspring of some of the Arkam residents that still packs a jolt.
Once inside the castle, Charles Ward gazes upon the portrait of his ancestor Joseph Curwen and immediately begins channeling his evil great-grandfathers personality while hooking up with his two assistants one of them being Simon Orne (Lon Chaney Jr.), here making his only appearance in a Corman film along with this being his only pairing with Price. Charles Ward/Joesph Curwen begins moving forward with his old plans which include resurrecting his previous mistress (Barbara Morris THE WASP WOMEN and who appeared in over 15 A.I.P. films from 1956 to 1970), and (hopefully) getting Debra Paget to get acquainted with "the thing in the pit". At the same time, the same group of angry villagers (Leo V. Gordon spends his brief screen time in a perpetual rage) us fuming in the same pub before the now possessed Price begins knocking them off in gruesome fashion as revenge for his previous century stake burning.

Price seems to be having a wonderful time playing the dual roles (especially toward the middle of the plot when he alternates between the two) and it's interesting to see him play somewhat of a   milquetoast character in the first scenes before he goes into the full arching eyebrows Vincent Price evil persona. Even though by this time this would the evil warlock would be a character Price could play in his sleep, he still brings a wonderful and entertaining level of professionalism to the role.  Chaney Jr.'s work had lately been regulated to guest spots on TV westerns and with the exception of Jack Hill's SPIDER BABY in 1967, this would be one of his last decent roles.
Debra Paget had had roles in several major movies including DEMETRIUS AND THE GLADIATORS 1954, THE TEN COMMANDMENTS 1956, and Elvis's LOVE ME TENDER in 1956, but made the biggest impression in Fritz Lang's THE INDIAN TOMB 1959 where has Seetha she did a dance that was forever ingrained on many a young boy's brain during it's frequent showing on Sat. afternoon TV. She doesn't get to do a lot here, seeming to spend most of her time cowering in her bed or wondering about the castle in her dressing gown - which to Paget's and cinematographer Floyd Crosby's credit do look ravishingly beautiful.
The movie's plot is indebted to Mario Bava's LA MASCHERA DEL DEMOINO (aka BLACK SUNDAY 1960) and that films motif of witches/warlocks being executed while invoking curses on future generations would be carried over in countless Euro-horror films of the coming decade along with John Llewellyn Moxey's CITY OF THE DEAD  (aka HORROR HOTEL 1960) which also seems to be an influence on THE HAUNTED PALACE (Roger Corman during this period was a  prodigious movie watcher).
Lovecraft's fiction often dealt with demonic cosmic entities, ancient evil religions of vast scope and unexplainable monstrous visages all of which are pretty much impossible to project on the screen (especially in 1963 on an A.I.P. budget) and THE HAUNTED PALACE attempts to marry some of this to a rather basic A.I.P. "Poe" plot. The result being is that's a great deal of exposition by characters in the film attempting to explain this which sometimes bogs down things in the middle and the films much talked about & hyped "pit monster" or "old one" is bound to disappoint if fully shown. Its wavy out-of-focus views during the plot's climax are more in line with what Lovecraft often described as horrors unable to describe. This film is my favorite of the Poe cycle and it's gorgeous to look at (it's Gothic overdrive to the max) and while only being nominally attached to the Lovecraft source novella it does an admirable job of invoking the spirit of H.P. and remains one of my favorite Lovecraft adaptions and one of my favorite Vincent Price roles. 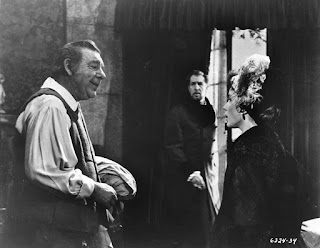 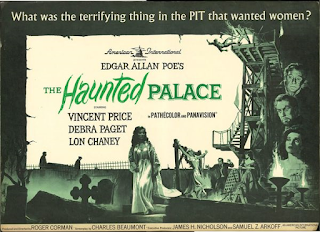 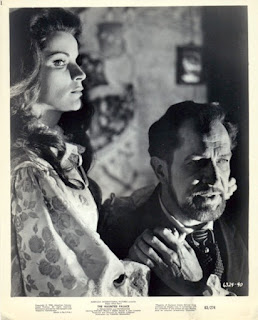 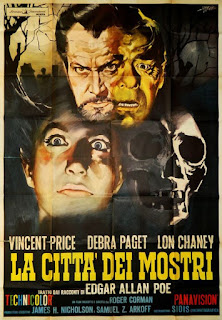 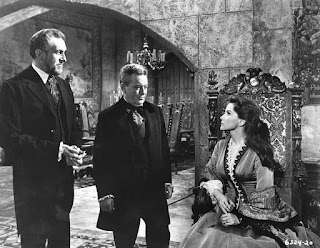 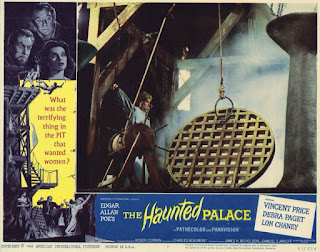 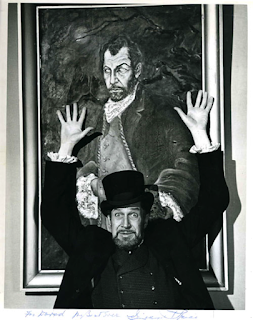