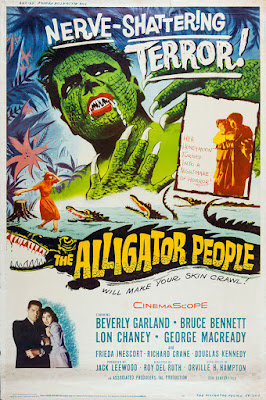 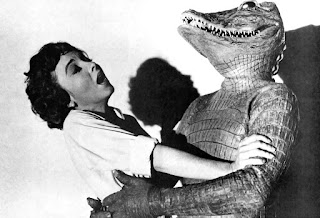 Released at the tail end of the 1950's sci/horror nature rum amok cycle 1959's THE ALLIGATOR PEOPLE was also one of those that fell into relative obscurity in the coming decades. Largely unseen as for some reason it was absent from the TV "monster kid" boom of the 60's and 70's with only the admittedly ludicrous looking still of heroine Beverly Garland struggling in the grasp of the title creature (a scene that never appears in the film) that popped up in magazines and books. It was finally given a DVD release by Fox in 2004 and more recently as nice Region B Blu (the UK version of which can be had for less than $10.00).
Often unfairly lumped in with the hipster "so bad, it's great" crowd, that while having it's share of  unintentional laughs (i.e. the alligator man running about in dress slacks and skinny belt) it's a highly atmospheric little production thanks in part mostly to B&W CinemaScope photography by the great Karl Struss (F.W. Murnau's SUNRISE and the 1931 version of DR. JEKYLL AND MR. HYDE). It also has a highly capable cast including the above-mentioned genre favorite Beverly Garland (IT CONQUERED THE WORLD), George Macready (PATHS OF GLORY) and of course Lon Chaney Jr. doing one of his patented late-career drunken lout roles.

Directed by Roy Del Ruth (this was his last feature in a career going back to 1920), it was produced by the independent company API (Associated Produces) as a co-feature for the company's THE RETURN OF THE FLY and was distributed (and probably partly financed) by 20th Century Fox. Most likely one those screen properties whose fruition worked backward from a title (and maybe even a poster) as you can picture a group of studio-types sitting around a table throwing out various animal names to attach to a project in conjunction with Fly's return. Access to the Fox production facilities also gave both films the use of the studio's CinemaScope process that for double feature play dates made it that projectionists didn't have to change lenses.
At a large unnamed city clinic, nurse Jane Marvin (Beverly Garland) suffers from a lapse of memory as she is missing an entire year out of her life. Given sodium pentathlon by psychiatrists Bruce Bennett (MILDRED PIERCE) and Douglas Kennedy (THE LAND UNKNOWN) she recounts in flashback her marriage to Paul Webster (Richard Crane THE NEANDERTHAL MAN). On their honeymoon and traveling by train, we learn in casual conversation that Paul survived a horrific plane crash and in spite of suffering a severe bodily injury he bears no scars or lingering injuries. While stopped at a station he receives a telegram that causes him to suddenly bolt from the train and disappear as the train pulls away leaving Jane alone.

Perplexed she spends the next year trying to track him down and finds a clue in the form of a Louisiana address on his college admission paperwork. Taking a train to the desolate town of Bayou Landing she arrives at the depot of the seemingly deserted town. Spying a wooden crate marked "CAUTION Radioactive Cobalt 60" she takes a seat on it (!!) and in a moment hook-handed Manon (Lon Chaney Jr.) shows up and offers her a ride to her destination which is the mysterious Cypresses plantation. After casually throwing the crate of radioactive material in the back of his truck he and Jane head off the remote plantation where Manon works as the handyman/lackey. While driving through the swamps Manon spies a couple of alligator "wranglers" trussing up a live alligator all the while waving his hook about and cursing the alligators who we learn had chomped it off earlier (he even gleefully runs over one as it crosses the road !).
Arriving at the plantation the owner Mrs. Lavinia Hawthorne (Frieda Inescort THE RETURN OF THE VAMPIRE) coldly greets Jane and insists she's never heard of Paul Webster. Discovering that she's missed the last train that day Lavinia allows Jane to stay locking her in a bedroom. Later that night Manon drunkenly shots at alligators in the nearby swamp while a maid warns Jane that the house is "deeply troubled"imploring her to leave immediately.
Discovering other mysterious goings-on including "swamp doctor" Dr. Mark Sinclair (George Macready) performing creepy skin revitalization via alligators experiments and patients swathed in bandages, Jane soon begins to realize what's up with her errant husband and the purpose of the experiments - deduction viewers will guess long beforehand.  Along the way, in a pretty shocking scene for 50's drive-in/matinee fare, she escapes a near-rape by Manon.
Something that's different here is that there's no actual hero in the film with no leading man to save the heroine from the beasties clutches at the climax and it can be augured (in a 180-degree turnaround) that Beverly's "Jane" is the hero of the film. Sure she recoils at the sight her alligator skinned husband but then immediately runs into the swamp after him - with Garland gamely splashing about in mucky water and skipping over live alligators. Macready's Dr. is no evil scientist as he actually cares about his "patients" and deeply worries about the afflictions which his experiments have caused. Chaney's scenery-chewing Manon although viscous & mean isn't even a real villain - just a drunken oaf who inadvertently sets in motion the finale.

When you pay to see a movie titled ALLIGATOR PEOPLE you better see an alligator person and in spite of its maligned main monster, the movie does deliver and is no better or worse then what should be expected, plus does add to the film's charm and place in the genre.  The makeup by Dick Smith (no, not that Dick Smith) probably would work best if kept in the shadows (think Val Lewton) with the scaly skin makeup effects on the partial gator men being pretty effective. The entire sequence at the beginning with Garland and the two psychiatrists feels kind of tacked on (the film would work fine without it) and was added to most likely beef up the running time as the film also gets bogged down a bit with lots of running about the swamp and creeping about the mansion.
Although some sources site Louisiana as a filming location the swamp & plantation setting have a very dusty southern California look to them and were most likely filmed on standing sets (probably at the Fox Ranch in Malibu). With its lighting and B&W scope photography ALLIGATOR PEOPLE has a unique look among the 50's big bug/reptile features. Del Ruth doesn't use the scope screen for any real atmosphere (mostly just having two talking heads on either side of the screen) and it's the lighting which really helps elevate the look of the film.
The professional cast elevates the sometimes talky script cast with Macready's line readings bringing a depth and seriousness to the proceedings while Beverly as usual jumps into her role with both feet. Garland always played strong resilient women and in her work for Roger Corman, he obviously saw this casting her in such roles as SWAMP WOMEN and GUNSLINGER while even in IT CONQUERED THE WORLD she shoulders a rifle and strides off to Bronson Cavern to hunt down the invader from Venus. 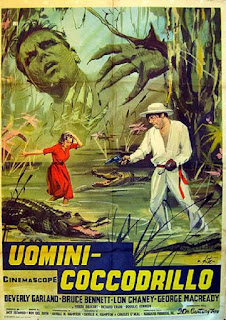 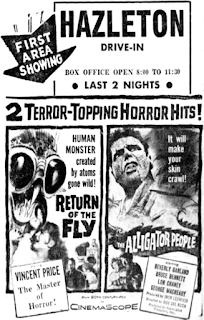 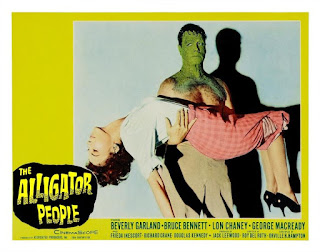 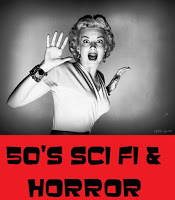