Marcia..Marcia..Marcia !
I've recently picked up some pretty cool movies among them a bunch of 1970's southern drive in"Hicksploitation"stuff. The first one I fired up was Moonshine County Express from 1977, co-starring Maureen McCormick (The Brady Bunch) as Sissy Hammer. Sissy is one of three sisters who vow to avenge their moonshiner daddy's death by evil town boss Jack Starkey played by William Conrad (Cannon). The other two sisters Dot & Betty are played by Claudia Jennings (Gator Bait & The Great Texas Dynamite Chase) and Susan Howard (Dallas).  Also helping out is stock car racer and "shine runner" J.B. Johnson played by John Saxon (Enter the Dragon). The wonderful thing about John Saxon is that no matter how low budget and/or crappy the movie is (and ol' John did a bunch of them) he always seems to bring his "A" game to it.
Director Gus Trikonis did bunches of exploitation stuff in the 70's (The Student Body & Five The Hard Way among others), before moving on to TV in the 90's. 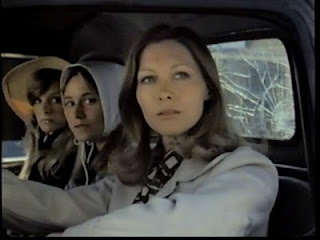 I have to admit McCormick's presence in this was one of main reasons for being curious about this. Her southern accent does come and go, but she does look pretty darn good in cut-off shorts and a halter top.  One of the best things about these movies is that they always seem to have great supporting casts and Moonshine County Express has Jeff Cory, Albert Salmi, Morgan Woodward, Len Lesser and drive-in favorite Candice Rialson. All the usual stuff is here - tires squealing on dirt roads, Calif. locations standing in for the south and of course car chases (and crashes). A pretty decent way to spend 95 minutes and plus any movie with Maureen McCormick, Claudia Jennings and Susan Howard as redneck sisters can't be all bad - can it ?? 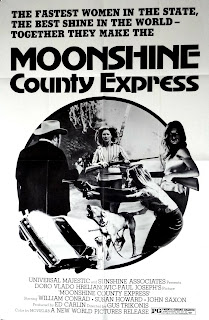 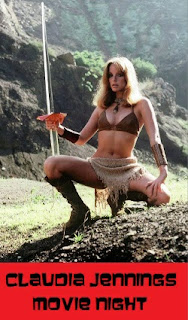