It Fri. night in Detroit, MI (and probably hot & humid as all hell) so let's go to a nice air-conditioned theatre or head over to a drive-in.

The world premiere of DETROIT 9000 is downtown at the Madison and at the Camelot and Norwest. Filmed on location in Detroit "It's the murder capital of the world, The Black rip-off of the decade, and a White cop squeezed in the middle", it stars the great Alex Rocco along with a host of Detroit area '70s personalities in cameos.

Featuring an ad campaign that promoted Detroit's infamous sky-rocketing homicide rate (a record 751 would be recorded in 1974), its a favorite of Quentin Tarantino and was directed by Arthur Marks who had a great run in the '70s with BONNIE'S KIDS ("Thank God She Only Had Two!"), THE CANDY SNATCHERS, FRIDAY FOSTER, and THE ROOMMATES among others. 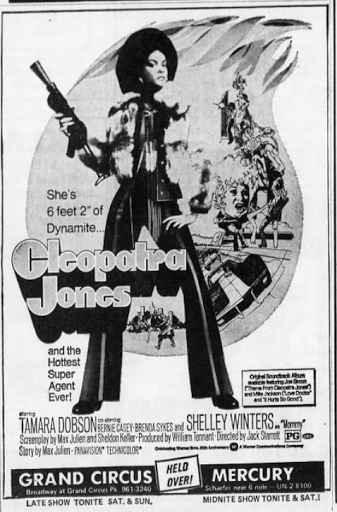 The magnificent Tamera Dobson stars in the surprisingly "PG" rated CLEOPATRA JONES ("She's 6 Feet 2" of Dynamite!") which has been held over at the Grand Circus and the Mercury. Directed by 70's drive-in guru Jack Starret (best known as the sadistic Deputy Gault in FIRST BLOOD), it also co-stars a full-on scenery-chewing Shelly Winters (who as to be seen to be believed here).

The Grand Circus along with the Fox and the Adams were the giant old movie houses in downtown Detroit located around the Grand Circus Park area. In the '70s they specialized in blaxploitation, kung fu, and stuff like the ILSA films. And on the way home, you could stop at Lafayette Coney Island.

Dwain Esper's infamous VD warning film SEX MADNESS (which harkens back to 1937) is getting one of its countless revivals in several area theatres. Hopefully, there was a white-coated guy in the lobby hawking pamphlets warning you of the ill-effects of pre-marital sex. "She Sought Thrills And Caught Trouble!"  Plus as a double feature, you get the 1927 "weed western" HIGH ON THE RANGE with famed Hollywood stuntman Yakima Canutt. 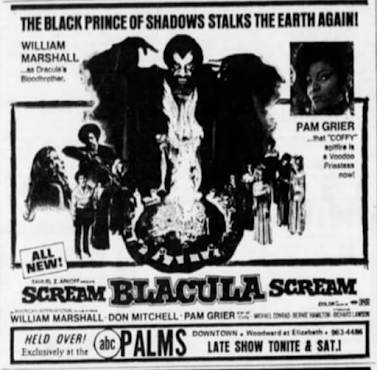 The sequel to 1972's BLACULA, SCREAM BLACULA SCREAM is held over at the downtown theatre the Palms. Starring the very effective and Shakespearian-trained William Marshall the ad really plays up co-star Pam Grier's involvement along with her recent hit COFFY ("Pam Grier-That Coffy Spitfire is a Voodoo Priestess Now!") which shows how big a box office draw she was in the '70s. 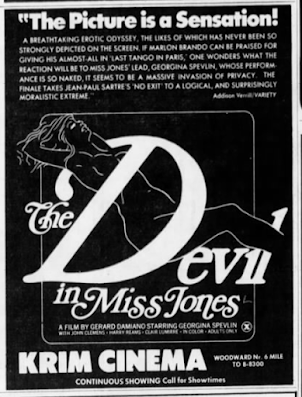 With a big 1/8 page ad the porno-chic, THE DEVIL IN MISS JONES from the previous year is still in its exclusive run at the Krim. Like DEEP THROAT, many theatres ran this almost 24/7 and it racked in tens of millions (if not hundreds of millions) of dollars for it's mob-controlled distributers during the '70s.

This and its follow-up GATOR from 1976 played drive-ins in the south well into the '80s.

Hey, look at this! There's a spook show happening at the Holiday Drive-In hosted by local Detroit horror host Sir Graves Ghastly. The spook shows are fascinating and now forgotten bit of film-going history. Usually featuring one (or maybe two) old "B" horror films they featured costumed monsters and guys in gorilla suits jumping out at the audience or rampaging through the drive-in lot all of which was hosted by a local celebrity (usually as here the local Saturday TV horror host). Sometimes at drive-ins, they would bury somebody in a box just under the surface of the drive-in lot (hopefully with an air outlet) and they would pop out at the appropriate time as a zombie.

Directed by Ralph Bakshi the animated (and unrated) HEAVY TRAFFIC is getting a pretty wide release. I remember seeing this later in the decade at midnight shows and this is my favorite of Bakshi's films. "More Spice From The Makers of Fritz The Cat!"

"For the Sake of Your Sanity, Pray it isn't True!" One of the greatest haunted house films ever and featuring a magnificent performance from Pamela Franklin, THE LEGEND OF HELL HOUSE (with another WTF were-they-thinking '70's "PG" rating) is still getting a broad release a couple months after its release date including the Northgate in Hazel Park which was a great somewhat-on-the-scuzzy-side theatre that specialized in horror and slasher.

Arguably featuring career-best performances from Gene Hackman and Al Pacino, the ultimate downer of a 70's buddy road movie SCARECROW is in its last week and is playing four theatres out in the 'burbs after it's April opening. 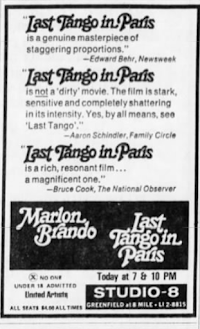 Down at the Studio 8 on 8 Mile and complete with a review quote from Family Circle (??) magazine ("It's not a dirty movie") is Bernardo Bertolucci's LAST TANGO IN PARIS. Located east of 8 Mile Road's string of topless bars, adult bookstores and massage parlors, The Studio tended to feature arthouse and foreign films. 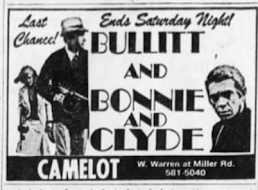 Last chance at the Camelot to see the really cool double feature of BONNIE AND CLYDE and BULLITT. A bit earlier than this, I saw BULLITT and NEVADA SMITH on a double feature. 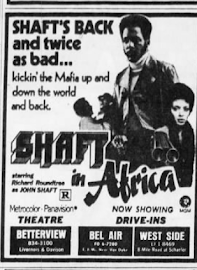 "Shaft's back and twice as bad...Kickin' the Mafia up and down the world and back." The third (and final) in the Shaft series the James Bond-ish SHAFT IN AFRICA is playing two drive-ins and one theatre. The weakest of the two sequels it has a plot that doesn't hold up to much scrutiny, but Richard Roundtree's screen presence helps as he busts a modern-day slavery ring and there's Vonetta Mcgee (who's also in  DETROIT 9000) and heaps of violence of bare skin. "Wanna see Shaft again? This time bring yo' momma!" 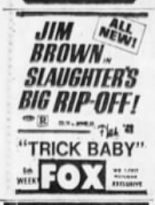 Down at the Fox, there's SLAUGHTER'S BIG RIPOFF with Jim Brown in the follow-up to 1972's SLAUGHTER with Brown's ex-Green Beret and his '73 Dodge Charger once again taking on the mob. Which here is in the form of Johnny Carson sidekick Ed McMahon (!!) plus you got perineal 70's heavy Don Stroud, Gloria Hendrey from LIVE AND LET DIE and SAVAGE SISTERS and of course, Jim Brown killing bunches of bad guys.

Rounding out the double feature is TRICK BABY from 1972 which is well worth seeking out. 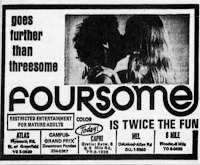 For the adults-only inclined we've got THE FOURSOME along with the always-running DEEP THROAT and some good old-fashioned burlesque at National Burlesk Theatre (across from Crowley's Dept. Store) featuring Mademoiselle Di-Di BangBang (42-24-36).