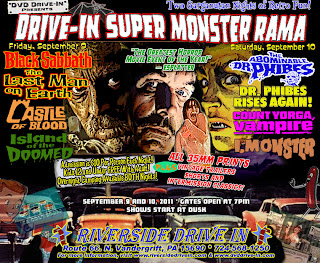 This looks to be really cool.  Mario Bava , Boris Karloff, Barbara Steele, Vincent Price, Christopher Lee, Peter Cushing etc in 35mm. - at a Drive-In !!  I really envy everybody who can go to this.  More info here
Posted by Dick at 5:55:00 PM No comments:

Email ThisBlogThis!Share to TwitterShare to FacebookShare to Pinterest
Labels: Drive In, Film Events 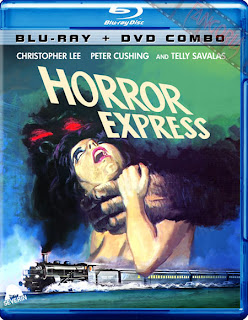 Here's the the specs:

Severin Films releases the disc Nov. 29, with a hi-def 1.66:1 transfer from the original negative. Horror legends Christopher Lee and Peter Cushing star as scientists who board the Trans-Siberian Railway in 1906 China for a trip to Russia—one that gets interrupted when an excavated frozen humanoid creature defrosts and begins stalking the passengers. The special features are:

I love this movie. Peter Cushing and Christopher Lee together on the Trans- Siberian express along with Telly Savalas  as a Cossack plus a missing link fossil that sucks your brain out leaving you a zombie. A English/Spanish co-production, it was thought that the train model was the one used in Nicholas and Alexandra that producer Bernard Gordon obtained and then commissioned a script to use it. According to an interview here , Gordon says it was left over from his production of Pancho Villa (which also stared Telly Savalas). The movie does feature a mad Rasputin type monk though, so you do have a tie-in to Nicholas and Alexandra train or not. 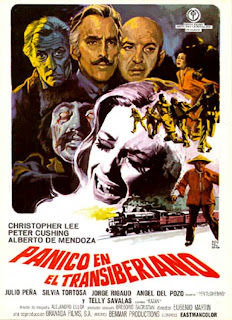 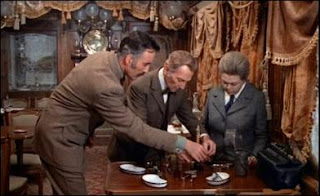 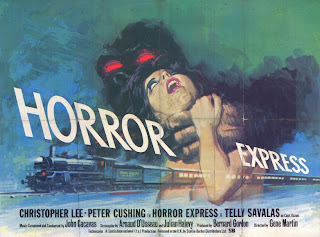 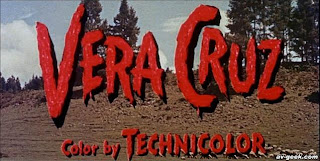 Finally got a chance to sit down and and enjoy MGM's recent Blu-Ray of Robert Aldrich's 1954 western Vera Cruz. This one was one of the releases that nudged me toward Blu-Ray. Man, I love this movie. Shot in Superscope ( a rather short-lived cheaper alternative to CinemaScope), the lens could be used with standard equipment cameras and no fees to Fox - who owned the CinemaScope process.
The interesting thing to me about this movie was that it seemed to be looking forward about 10 years to the "spaghetti western" genre. The shifting alliances of the main characters, the influx of modern weaponry (like the the machine gun) into the traditional western, the setting of the post American Civil War Mexico with the French occupation and Emperor Maximilian were all staples of the Italian westerns of the 60's. Sam Peckinpah would also explore some of these same things in his westerns such as Major Dundee and The Wild Bunch (Burt would again too, in Richard Brooks 1966 western The Professionals).
Burt Lancaster and Gary Cooper work great together. It's fun watching Burt's typical bigger then life performance with his huge smile, compared to Copper's stoic man of few words.
The disc itself looks fine - colors vary a bit and is pretty much a bare bones release, just the trailer and the original mono sound (which is fine by me). 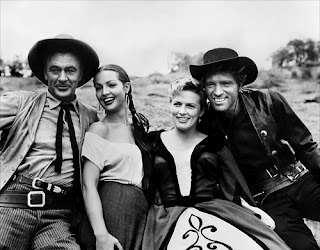 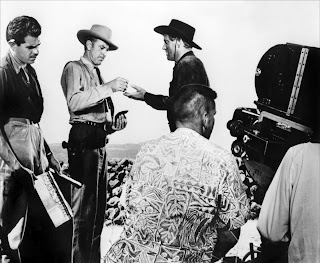 Looks to be director Aldrich in the middle 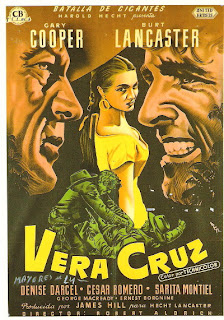 The Killer Is Loose DVD

MGM just annouced some more MOD DVD's thru Screen Archives , among them is The KIller Is Loose from 1956 directed by Budd Boetticher and shot by Lucien Ballard. Boetticher was just starting to get rolling - his next three movies were Seven Men From Now, The Tall T and Decision At Sundown (need I say more). A great film noir with a really unsettling preformance by Wendell Corey. Also with Joesph Cotton and Rhonda Fleming. 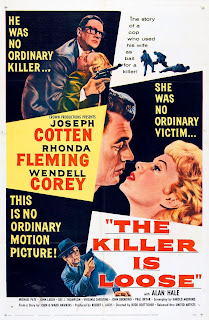 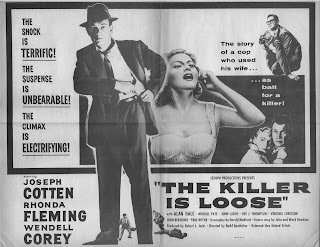 Peter Falk, best known as Columbo on the long running TV series has passed away.  Also stared in many movies among them It's a Mad, Mad, Mad, Mad World, The Brink's Job, Murder Inc. and one of my favorites The In-Laws. A close friend of John Cassavetes he also appeared in several of his films. 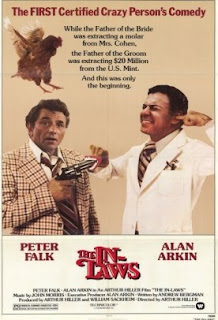 Bill Lustig's annual film festival "William Lustig Presents" starts this July 15th at the Anthology Film Archives in NYC. As usual he's got some great stuff lined up such as Navajo Joe, The Brinks Job and best of all The Super Cops - Gordon Parks almost forgotten follow up to the Shaft movies (Where's this on DVD ??). Wish I could be there ! Plus it's all shown in 35mm. 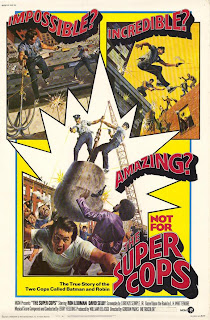 Mr. Lustig is also the guy behind Blue Underground , who release bunches of great stuff on DVD/BD.﻿
Posted by Dick at 9:47:00 PM No comments:

Dark of the Sun on DVD !

A new release from Warner's MOD program and one of my favorites. I think this is Rod Taylor's best performance, plus a cast that includes Jim Brown, Kenneth Moore and Yvette Mimieux. Directed by Jack Cardiff and featuring a fight with a chainsaw, plus Rod driving the hell out of a Land Rover. Sweaty, brutal and pretty much non-stop action. 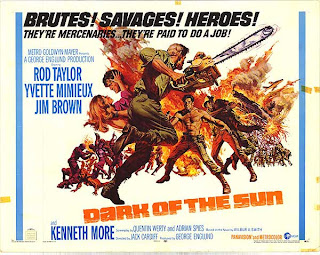 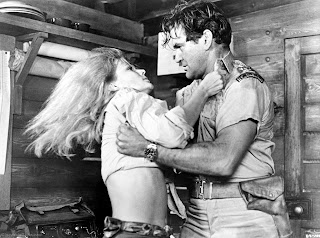 Some interesting coming soon stuff has shown up on the Synapse website. The one I'm most excited about is The Exterminator on Blu-Ray. 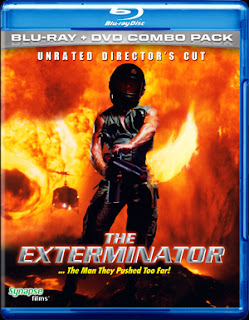 One of the better Death Wish rip-offs, this stars Robert Ginty (best known to most people from the TV show Baa Baa Black Sheep) as a Vietnam vet who goes vigilante on the streets of New York City after his best friend is killed by a gang. Great views of pre- Disney Times Square/42nd St. and some pretty spectacular Vietnam footage shot at Indian Dunes in Calif.  Also starring Christopher George and Samantha Eggar.
A bare bone non-anomorphic mono DVD was issued by Anchor Bay years ago and this is sure to be a major upgrade. 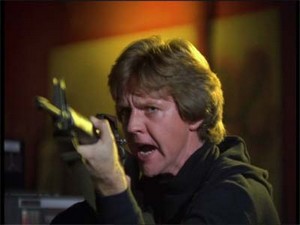 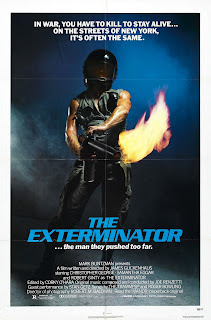 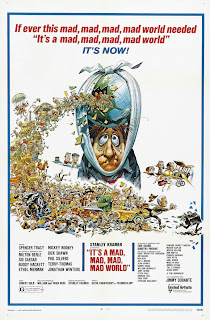 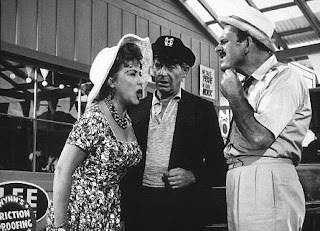 Walmart has a bunch of new exclusive BD's coming. Foremost among them (for me at least) is the July 5 release of It's A Mad, Mad, Mad, Mad World. Advance specs seem to confirm that's its the standard 161 minute version- so hold on to those laser discs/VHS that contain the 182 minute version MGM assembled back in 1991. A major restoration was rumored a few years ago, but with MGM's money woes this seems to have fallen off the radar.  Although I didn't see it, a recent showing on an HD channel looked beautiful according to several posts on the internet.
Posted by Dick at 10:30:00 PM No comments:

Criterion Does The KIlling on Blu Ray/DVD !! 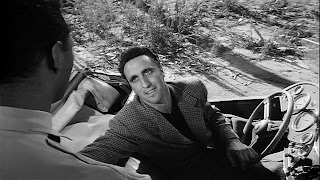 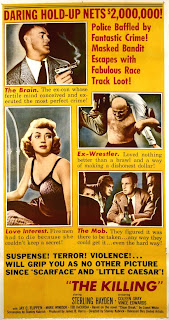 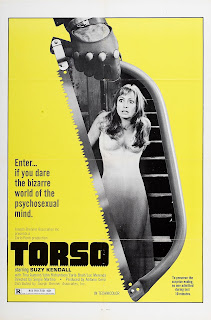 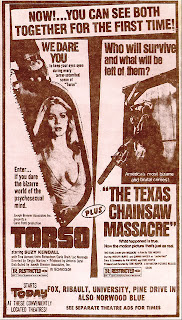 Blue Underground is releasing Sergio Martino's classic 1973 gaillo on DVD and Blu Ray on Aug. 30. The cool thing about this is that once you get your Torso BD, grab a Texas Chainsaw Massacre BD from Dark Sky (OOP, but still pretty easy to find) and you can  re-create one of the greatest drive-in double features of all time in hi def. Grab some ice cold Cokes, make a big bag of greasy popcorn. threw in a couple of hot dogs and you got yourself a hell of a night. To make it complete do up a DVDr with a few trailers and snack bar promos.
Posted by Dick at 5:55:00 PM No comments: