Nucleus Films have posted an update on their ongoing restoration of Mel Welles 1974's feminist take on the Frankenstein mythos LADY FRANKENSTEIN. Their upcoming release of this Rosalba classic will clock in with a 99 min. (!!) running time - which is longer than all previously released versions! They also put up some month watering frame grabs as seen below.  Sept is the projected release date. 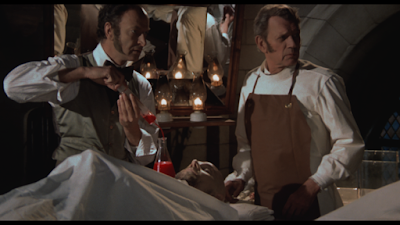 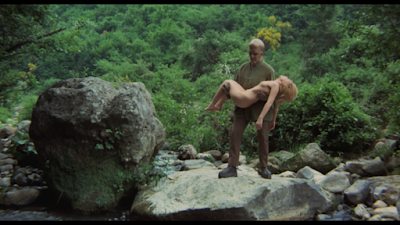 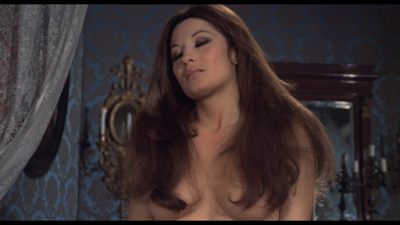 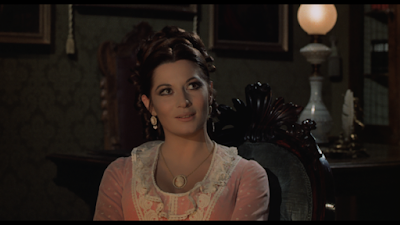 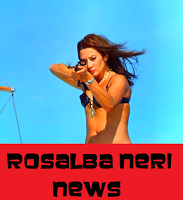 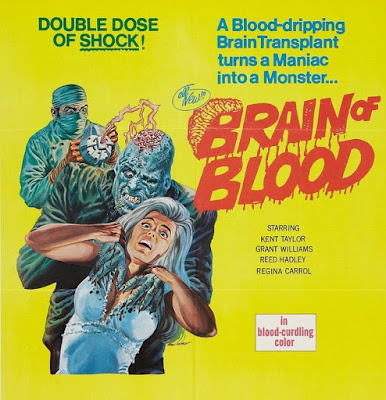 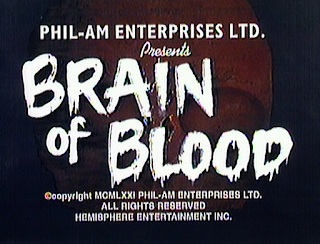 In 1971 after the successful run of Hampshire produced/Filipino shot Blood Island movies, Sam Sherman & Al Adamson's American Independent Productions (who had distributed Hampshire's product in the U.S.) discovered the Filipino production company's schedule booked solid and decided to produce an American version of the studios patented low budget horror.
With the title alone (and maybe the presence of Kent Taylor from BRIDES OF BLOOD) attempting to tie it into the earlier Blood Island series, Sherman and Adamson created a Southern Calif. produced horror product that that in a strangely opposite kind of way tried to hide its American origins and be passed off as a foreign production.
Zooming in on a still photo of Middle Eastern-type palace we're introduced to King Abdul Amir (character actor Reed Hadley in his last role) of the fictional Middle Eastern nation of Kahlid. Dying of cancer, he's attended by Dr. Robert Nogserian (Grant Williams THE MONOLITH MONSTERS) who revels to Amir's aide Mohammed (Zandor Vorkov DRACULA VS. FRANKENSTEIN) and his "# 1 secret agent"(!!) Tracy (the wonderful Regina "Freak-Out Girl" Carrol from ANGEL'S WILD WOMEN and SATAN'S SADISTS sporting a massive blonde hair-do & white go-go boots) that he has a plan to save the beloved ruler. Explaining that he has a "mostly discredited"(!!) doctor colleague in the U.S. who can perform a brain transplant that would allow Amir's brain to live on in a new body, Nogserian proposes flying Amir immediately upon his death to the U.S. for the operation by his doctor buddy Lloyd Trenton (Kent Taylor from BRIDES OF BLOOD and BLOOD OF GHASTLY HORROR) as he explains there's a 15 hour (!!) window in which to remove the brain and successfully transplant it. 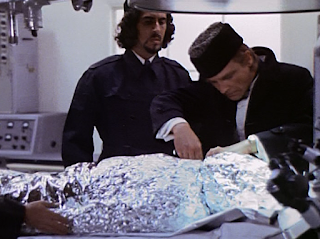 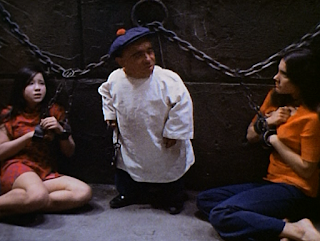 In the blink of an eye, Nogersian and Mohammed are driving through the canyons of So. California in a station wagon on their way to Trenton's lab with Amir laying in back wrapped in tin foil. Upon arriving at the lab Trenton informs them that he has no ready donor body but insists that this presents no problem as he can remove the brain and keep it alive with his nifty brain life support machine. Operating with his assistant Dorro (small person Angelo Rossitto from MESA OF LOST WOMEN & MAD MAX: BEYOND THUNDERDOME - and who must push a chair up next to the operating table to assist) he removes the brain and sends his other henchman Gor (7' 4" John Bloom THE DARK and THE INCREDIBLE TWO-HEADED TRANSPLANT) out to procure a body. Gor has a horribly scarred face which we're shown in flashback as the result of a run-in with beer-swilling bullies & battery acid.
Heading off to a hotel (seems Doc Trenton doesn't have guest quarters) Nogersian and Mohammed are forced off the road by an unknown shaggy-haired assassin driving a big 'ol Cadillac in a chase that seems to take up a 1/4 of the movies running time. Nogersian alone survives and thinking there's something fishy going on contacts secret agent Tracy to come over and help (and gets a buxom blond in line for some monster terror). 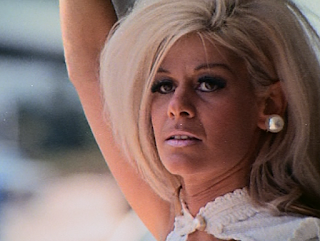 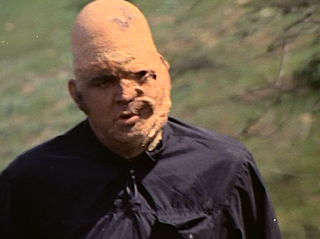 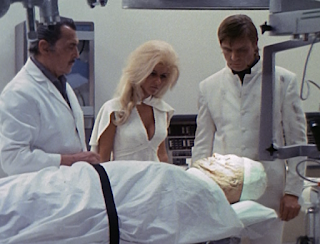 Unfortunately, Gor finds a suitable body donor by catching a burglar in act and pitching him off a roof. Scolding Gog after finding the body unusable Trenton comes up with the idea of transplanting Amir's brain into the hulking body of the acid-scared Gor (Hey, what can go wrong here??). Trenton also keeps a couple of women chained up his dungeon as he periodically needs blood for his experiments along with Dorro being able to terrorize them ever so often (in addition the scene provides for a memorable publicity still).
Unlike most of Adamson's other films BRAIN OF BLOOD was filmed as a complete movie and is minus his usual trademark of mis-matched footage cobbled together from other acquired and/or aborted projects. This all leads to a kind of cohesive storyline that while more like an actual film is missing the daffy of wackiness of HORROR OF THE BLOOD MONSTERS (which is a true mind bogglingly experience to sit through).
Complete with a bloody brain operating sequence and that along with the presence of Tito Arevalo's score for MAD DOCTOR OF BLOOD ISLAND used throughout, BRAIN OF BLOOD does get some atmosphere of the Blood Island mayhem it was trying to emulate with Regina Carrol more than ably filling in for Angelique Pettyjohn or Beverly Powers. The fetid humid jungle atmosphere is missing however along with blood soaked bare female flesh (and John Ashley).
Grant Williams (who started out singing in the New York City Opera) was a Universal contract player in 1950's and along with MONOLITH MONSTERS is most famous for the title role in THE INCREDIBLE SHRINKING MAN in 1957. Later he opened an acting class in Hollywood with BRAIN OF BLOOD being his last screen credit.
After being reported missing in 1995 Adamson was found brutally murdered and buried under his hot tub with his contractor later being arrested & convicted for the crime. Along with his horror output he directed some hugely entertaining and brutal biker films including SATAN'S SADISTS (1969), ANGELS' WILD WOMEN (1972) and HELL'S BLOODY DEVILS (1970) along with the Russ Meyer inspired I SPIT ON YOUR CORPSE. 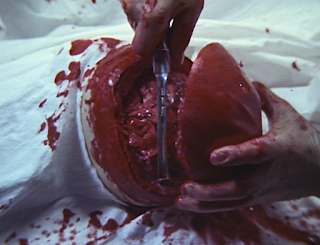 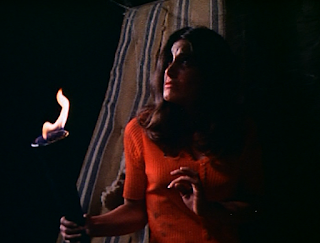 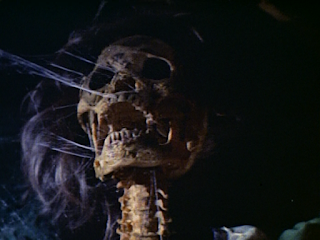 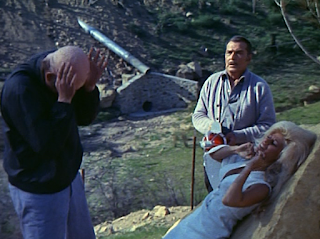 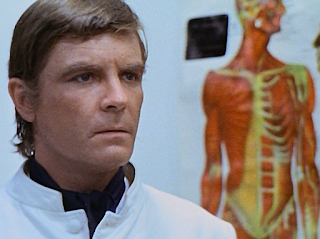 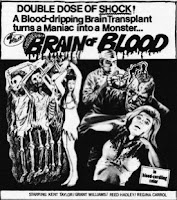 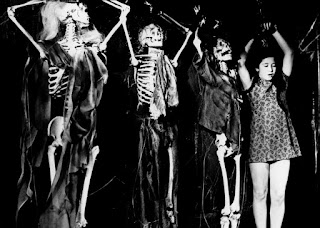