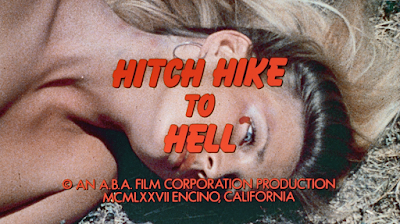 "There's No Such Thing as a Free Ride!" 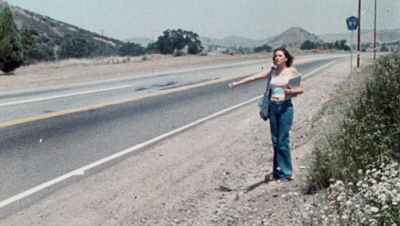 Distributed by legendary exploitation producer Harry Novak's Boxoffice International this is one of the numerous low-budget films that proliferated post-Manson/peace & love 60's that dealt with the dangers of being "on the road" and the perils associated with hitchhiking. Flatly directed with the feel of PSA warning film gone horribly wrong, it's a ramshackle down & dirty little film which nether the less tries to bring something more to the foreground in as far as the main character's mental state and motives.
Startlingly opening with black screen while sounds of violent struggle are heard, next to a cautionary folksy song kicks in "But there's daaaaanger on the road....Danger on the road...When you go thumbing a ride.."  and then a screaming female victim falls into the screen behind the opening credits. Somewhat nerdy (and twitchy) Howard "Howie" Martin (Robert Gribbin TRIP WITH TEACHER) spends his days traversing long stretches of Southern Calif. roadways delivering dry cleaning out of a van while picking up the world's oldest looking "teenage" hitchhikers. Once inside the van, Howard questions his new passengers inquiring about their relationship with their mother. If it turns out they're running away things go bad really quick, but if it's just a lift or a ride home they need it's no problem as nice-guy Howard delivers them safe and sound. 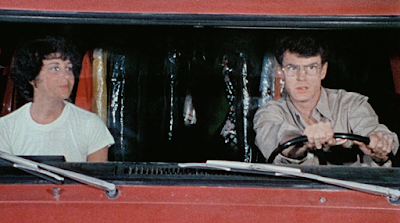 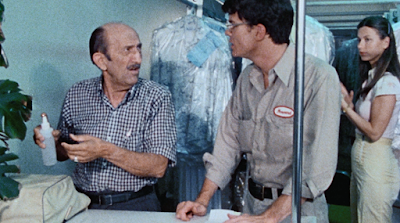 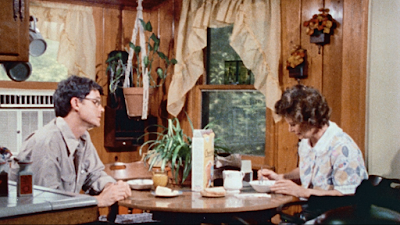 He periodically suffers blackouts and lapses in time judgment that causes his grouchy boss Mr. Baldwin (character actor John Harmon from THE MONSTER OF PIEDRAS BLANCAS & THE UNHOLY ROLLERS along with 266 other acting credits) to constantly threaten to fire him while pretty co-worker Phyllis feels sorry for him. At home, Howard lives with his mother (Dorothy Bennett) and some years ago his sister ran away from home never to return. This caused his mother great anguish which in turn manifests itself in Howard's growing psychological issues which are only comforted by a prodigious intake of root beer floats and working on car models. Howie's increased twitchiness along with staring bug-eyed at screaming newspaper headlines about the murders and frequent lapses in time-management doesn't cause any undue alarm for anybody (with his boss only concerned with his tardiness) and his mom keeping up a healthy supply of advice and root beer.
Unexpectedly the film shows Howard to have a healthy relationship with his mother. She genuinely cares about him and shows none of the over-bearing motherly suffocation nor does she hammer a weird sexual psychosis into him. As a matter of fact, for a movie concerning a serial killer, there's a very easy-going laid-back feel to the film as people spend a lot of time just hanging out in the office or their homes talking. The killings are handled quickly with jarring camerawork which is hard to tell if it's based on incompetency and a try for "artiness". At one point Howie picks up a gay hitchhiker (which in the hands of a more daring director could have really led down a rabbit hole) and there's a young child involved at one point which leads the film to a very dark & disturbing place at its climax which none the less is very low key and somber. 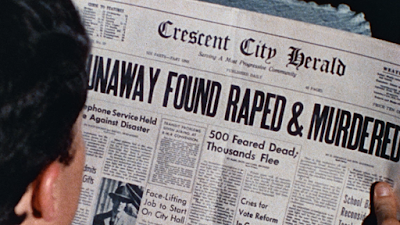 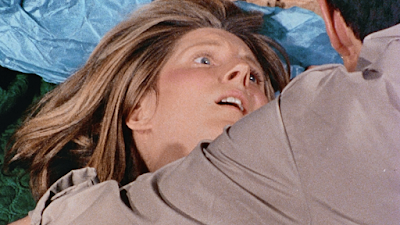 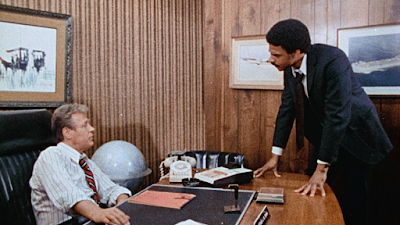 Once the police get the idea that a serial killer is trolling through the area their presence is represented by Capt. Shaw (Russell Johnson from GILLIGAN'S ISLAND) and Lt. Davis (Randy Echols) who spend most of the time hanging out in the Crescent City police station ("this is home of the largest population of teenage runaways") and engage in Jack Webb-like dialogue ("It seems there are delinquent parents just as delinquent children"). A good deal of time is also spent with Davis at his home where he and his wife discuss whether it's a good idea to bring a child into the world.
One of the victims is even given quite an involved backstory involving her parents and the film does attempt to give most of the secondary characters something to do (even it is just sitting around & talking). There's also more time than expected given to show the escalating collapse of Howie's mental state, but with all these added peripherals to the plot, it never strays too far from its exploitation intent.
Filmed around Encino on the western edge of the San Fernando Valley (where I'm sure now are endless rows of subdivisions) the film has a dry, desolate look to it with Howie's delivery area ranging to the far reaches of civilization. Filmed with the no-nonsense look of an educational warning film i.e. "Don't Hitchhike!" it has a look of an episode of ADAM-12 or DRAGNET which makes the violence seem all the more startling. The two detectives even engage in some DRAGNET style gesturing and pointing at a crime scene and all the bedrooms look suspiciously like a motel room. But hey, where else are you going to see the professor from GILLIGAN'S ISLAND track down a serial killer??
Expect for Russell Johnson and Robert Gribbin the rest of the cast is pretty much one and done after this film and director Irvin Berwick who had a career going back to the mid-1940s would retire after his next film MALIBU HIGH in 1979. There's an excellent video feature about him by Stephen Thrower on the Arrow Blu-ray that mentions his connections to Universal horror movies, the JFK assassination, and several soft and hardcore features. The singer featured in the film's soundtrack is Nancy Adams who at the same time as this was also working on the soundtrack to Disney's ROBIN HOOD. The soundtrack itself is a curious mishmash of styles from folksy-country to ominous orchestral cues, including a library track that will be instantly familiar to fans of David Cronenberg's RABID.
Re-released several times during the '70s with a reported start date initially in the late '60s, it shared a double feature with KIDNAPPED COED (with was released by Severin on Blu). 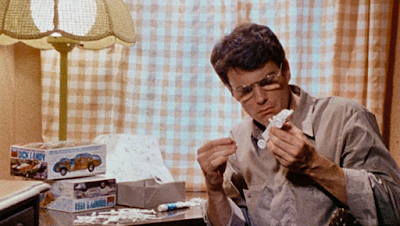 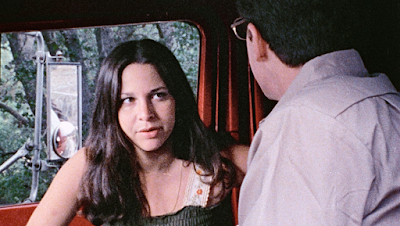 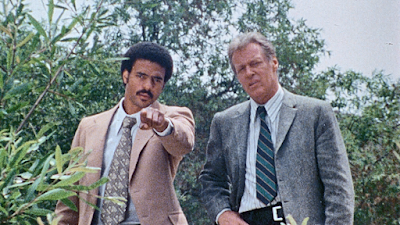 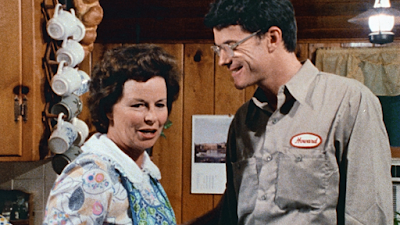 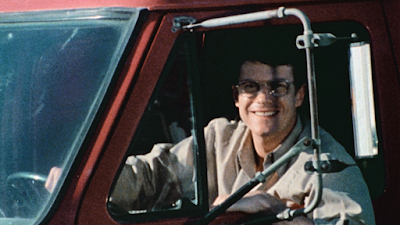 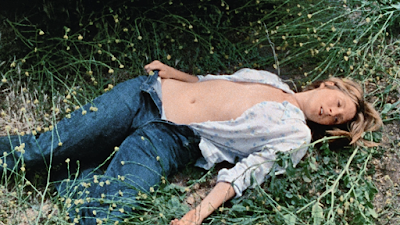 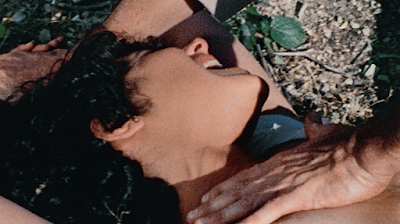 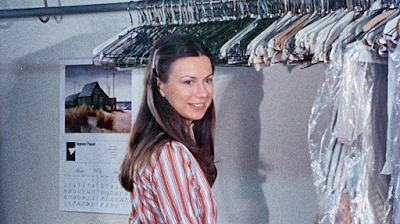 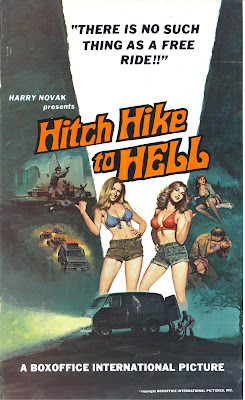 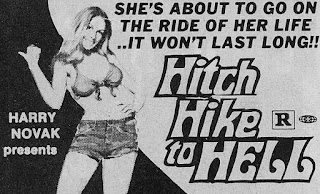 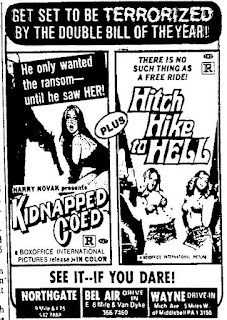 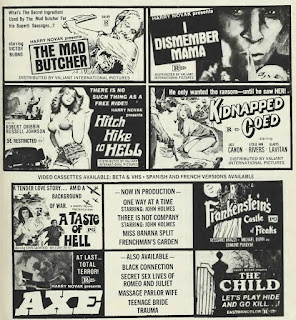