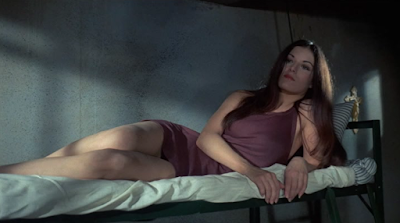 Some sad news to pass along, as actress Pat Woodell passed away on Sept. 29 after a long battle with cancer. A striking long haired brunette, she was born in Winthrop, MA. and started out in early 1960's television, appearing in the first two seasons of PETTICOAT JUNCTION as "Bobbi Jo" before leaving and starting a singing career with some success.
Although most of the online obituaries have focused on her "wholesome" 1960's TV work during the following decade she carved out a well remembered niche in exploitation movies with a couple of Arthur Marks features including 1973's THE ROOMMATES and CLASS OF '74 from 1972. Along the way she also appeared in several Filipino drive-in classics including Eddie Romero's Island of Dr. Moreau knock-off THE TWILIGHT PEOPLE (1972) and his version of The Most Dangerous Game in 1972's THE WOMAN HUNT.
In 1971 she played tough as nails convict "Bodine" in Jack Hill's classic THE BIG DOLL HOUSE ("Their bodies were caged, but not their desires !"). The first (and best) of Roger Corman's New World Filipino productions, it also starred Judith Brown, Pam Grier, Roberta Collins, Christine Schmidtmer and (of course) Sig Haig. Pat was pretty unforgettable in the film's climax as she blasts away with a pair of machine guns. She is very missed. 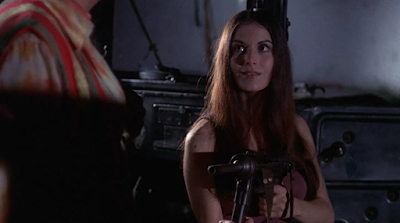 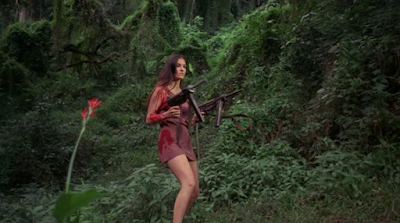 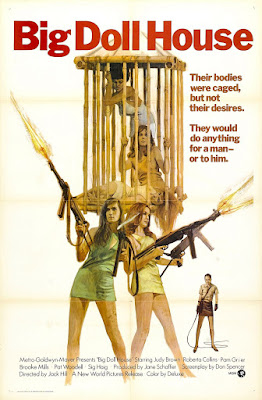