"Your pretty high and far out. What kind of kick on you on, son ?" 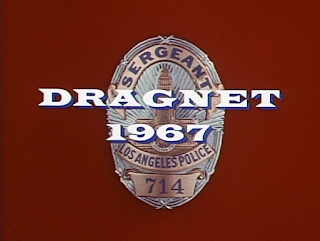 "It was Tuesday March 15th. It was fair in Los Angeles"
"We were working the day watch out of Juvenile Narcotics"
"The boss is Capt. Richie" 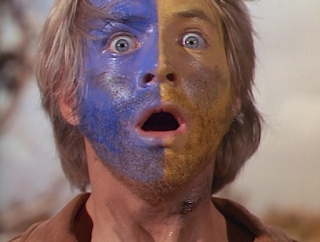 In 1966 Jack Webb relaunched DRAGNET for NBC television and a featured length movie was produced as a pilot which did not actually air until 1969. The series proper premiered on Jan. 12, 1967 with this episode which has become of the best loved for fans of the series. Playing it would seem constantly in reruns somewhere during the 70's and beyond, these newer color episodes have somewhat sadly become more readily available the series classic B&W run in the 50's. With the new color episodes Webb's never changing wardrobe of dark slakes and grey sport jacket stand out along with the brown smog drenched opening shot of Los Angeles ("This is the city...")
Now produced in color Webb decided it was time for the TV version LAPD and Sgt. Friday to confront the exploding counter culture moment and the associated drug use which in turn accounted for some the more infamous &  entertaining episodes of the series (including next seasons THE BIG PROPHET and the much-loved THE BIG HIGH). One more major change for the series revival was a new partner in the form of Webb's old friend Harry Morgan as officer Bill Gannon. Like Ben Alexander's portrayal of Det. Frank Smith in the B&W series run, Morgan's deft touch of comedy was a perfect foil for Webb's portrayal of the ramrod straight Friday and their interactions would become highlights of the new episodes (you see Webb trying his best to stifle laughter during some sequences).
Sometimes known as the "Blue Boy" episode this initial episode of the resurrected DRAGNET took the no-nonsense Joe Friday crashing headlong into the world of psychedelics, Sunset Blvd. and hippies. It takes place in the historical time frame before the outlaw of LSD on 10/6/1966 - which the episode takes note of. 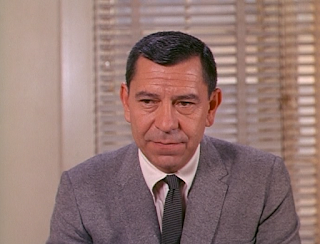 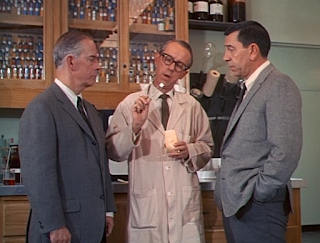 Working out of the Juvenile Division Friday & Gannon respond to a call concerning strangely behaving teenager Benjie Carver (child actor Michael Burns) whose been reported tripping out in vacant lot with his head buried in the dirt. Popping out of the ground with a yellow & blue painted face he utters such classic lines as "I'm green, I'm a tree!" and proclaims himself to be "Blue Boy!"
Arresting him and bringing him back to station the officers face the wrath of the boy's parents who being obviously upper class start throwing their weight & money around ("Are saying my son is a drug addict !?"). We then get a trip to forensic chemist Ray Murray (Webb regular Olan Soule - and probably my favorite actor in the Dragnet universe) where he relates the history and effects of LSD with the some hoped-for chilling asides with ominous cue music concerning its effects. 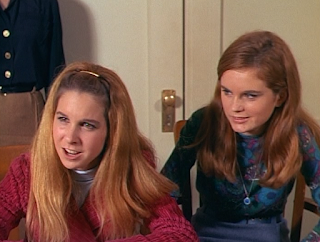 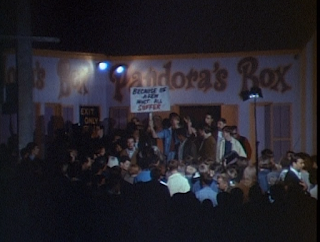 With Benji let off with probation Friday & Gannon begin coming across various kids who become involved with LSD but are set straight with Friday sternly explaining how a simple experiment with marijuana can lead to LSD and as mentioned the episode takes place in the historical context before the drug was outlawed.  The story ends with the passage of the law outlawing LSD and the expected tragic climax of the episode. Along the way we get some great footage of the Sunset Strip (used in later episodes) including Pandora's Box and The Trip - complete with a Marquee for The Ted Neeley Five (Neeley later played Jesus in the original Broadway production of JESUS CHRIST SUPERSTAR). At one point Friday and & Gannon bust a hippie drug pad that features psychedelic lighting and a guy eating paint (!!) all set to some trippy music played backwards on reel-to-reel tape deck.
Shari Lee Bernath (THE FIEND WHO WALKED THE WEST 1958) and Heather Menzies-Urich (PIRANHA 1978) show up as a couple of wayward teens who after experimenting with LSD are put back on the straight path by Friday & Gannon (with the girls even becoming snitches!).  Also on board is soon to be series regulars Alfred Shelly (usually playing secondary Sgts or detectives), busy TV character Arthur Knapp as the pushy father and Art Balinger (usually as here playing the stern captain). 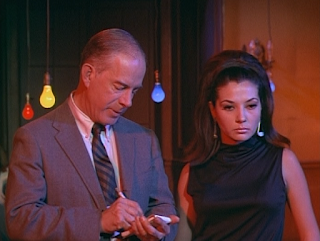 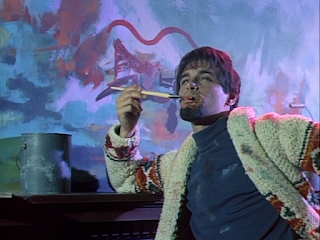 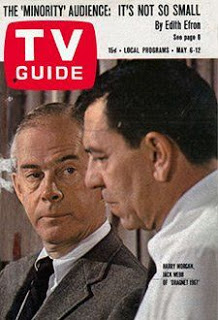