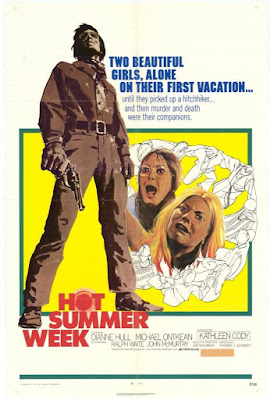 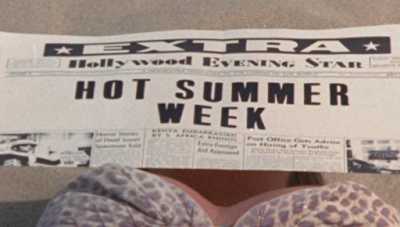 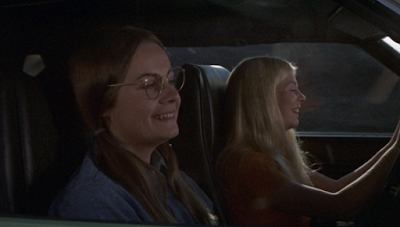 A frustrating example of film that should (and could) have been a nifty example of early 1970's drive-in/exploitation, this was first released under the title HOT SUMMER WEEK in early summer 1972 and after having not made nary a ripple was sent out the following year re-titled GIRLS ON THE ROAD which played up the thriller elements a bit more. Producer Joe Solomon and Fanfare Productions had a pretty good run before this with HELLS ANGELS ON WHEELS (1967), THE LOSERS (1970), EVEL KINIEVEL (1971), WEREWOLVES ON WHEELS (1971) and he was the subject of an article in Esquire ("The Last of the Schockmeisters" written by Roger Ebert). Not featuring a whole lot of "road", "girls" or "hot" sadly GIRLS ON THE ROAD (or HOT SUMMER WEEK) is a bit of an outlier in Solomon's career as went on to produce the solid Blaxploitation police drama TOP OF THE HEAP (1973) and A SMALL TOWN IN TEXAS (1976 - directed by the great Jack Starrett).
Part of that 70's sub-genre of dangers of the road which included JOYRIDE TO NOWHERE (1977), HITCH HIKE TO HELL (1977), THUMB TRIPPING (1972) and THE YOUNG CYCLE GIRLS 1978 , the opening credits for GIRLS ON THE ROAD start off promisingly enough with a quick shot of softcore big bust queen Uschi Digart (YAAH!! Uschi!!) in a bikini which is followed by a desperate attempt to be cool as the credits roll through on bumper stickers, graffiti and various signs interspersed with such classics as "Honk If Your Horny". We're then introduced to a pair of SoCal. high school girls studious bespectacled nice girl Karen (Dianne Hull ALOHA BOOBY AND ROSE) and somewhat spoiled rich girl cheerleader Debbie (Kathleen Cody SUPERDAD). It's quickly revealed that neither one of them gets into much trouble in school and being self-proclaimed "wallflowers", they cling to each other during a party chaperoned by Debbie's parents and watch in envy to some PG-rated debauchery by their fellow classmates. They decide this being the first day of summer vacation to take off on a spur-of-the-moment road trip.
Driving off in Debbie's new Mustang for her parent's beach house in Big Sur the pair joyously decides to "let their hair down" which involves driving like idiots while bouncing off a few curbs & running red lights, flashing older motorists and throwing their bras out the window. Being the 1970's they decide to pick up some hitchhikers ("only the cute ones") and soon give a hippie a ride but end up stranding him and steal his guitar. 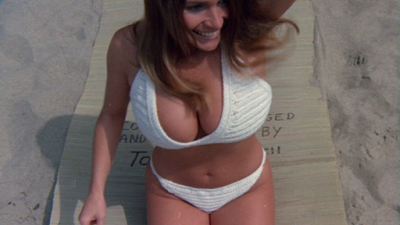 An Uschi cameo is always a good thing! 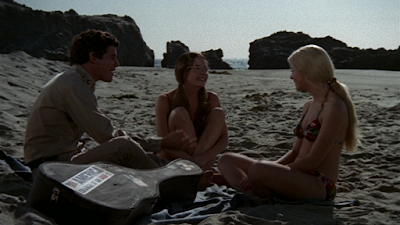 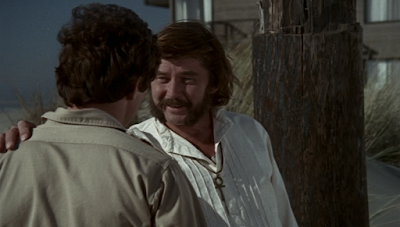 Unbeknownst to the pair, there's a serial killer operating in the vicinity of the beach house where they're headed who's been killing young girls and leaving their bodies on the beach. There's a likely suspect in the form of a recently discharged Vietnam Vet named Will (Michael Ontkean from THE NECROMANCY and later the sheriff in TWIN PEAKS) who periodically suffers from flashbacks that appear to be pieces of various colored clear plastic bent & waved in front of the camera. He's first shown in a roadside diner where he gets in a fight with a couple of pool playing bikers (one played by famous stuntman Charlie Picerni) and gets the best of the situation by pulling a gun on them.
After the encounter at the diner, Will wanders out to the road to hitchhike where he's picked by you-know-you. It seems he's heading to the same general area in Big Sur as the girls. He's going back to a place called The Institute Of Human Potential (??) which is one those California encounter group things unique to the 70's which pop up constantly in movies from that era (there even one in MAD MEN) where folks sit around in a circle, engage in meditation and everybody and everything is "beautiful". The Institute (conveniently enough) is located right next door to the girl's beach house destination and plus just happens to be where bodies from the serial killer are showing up.
Upon arriving they meet the head of the institute John (a shaggy-haired and bearded Ralph Waite from THE WALTONS) who's been worried about the till now gone-missing Will and immediately shows a creepy interest in the underage Karen while Debbie and the still flashback induced Will to start a romance. Also lurking about is Lt. Williams aka "The Maker" (John McMurty GROUP MARRIAGE) who's a former comrade of Will and who paints people faces, carries around a dove, constantly wants an audience as he acts out his "fantasies" in glitter makeup and stares creepily at the two girls. Throughout the film, we're constantly hearing newsflashes blaring out breathless reports concerning the killer even when there's no radio or TV in sight (which were probably added post-production) and despite the non-stop media coverage, there's disturbing lack of police presence about the area (meaning none). 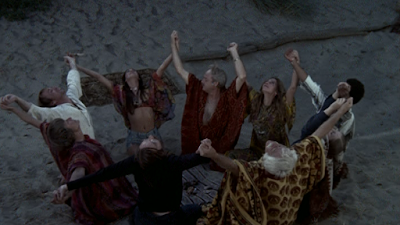 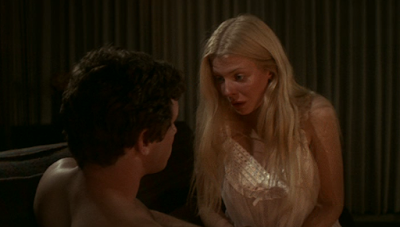 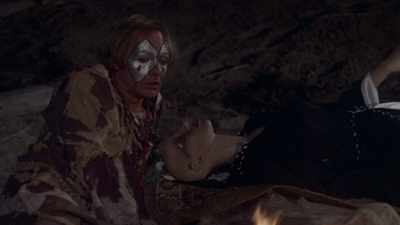 The plot unfolds as a curious mish-mash of a coming of age along with road film (although played up in the advertising we only spend about 20 min. on "the road") and a serial killer/proto-slasher with a strangling and a climax that features an axe welding maniac as Will's wavy colored flashbacks take up an inordinate amount of screen time. The trailer included on the Scorpion DVD carries a PG rating which is very well in line with what you could get away with in 70's as the film features some scant nudity and blood. You get distinct feeling that this originally started out as an R rated production before something happened along the way.
Waite walks away with the acting honors without even half trying and the two girls even though looking distinctly different often seem to be playing the same rather bland character. The films ends really abruptly as if they simply stopped filming or there were a few pages of script missing. Dianne Hull was later very touching as one of the title characters in Floyd Mutrux's sadly underappreciated ALOHA BOOBY AND ROSE in 1975. Producer Joe Solomon shows up in a cameo has a liquor store customer who buys the girls some beer.
The film features some attractive cinematography courtesy of David Walsh (CLEOPATRA JONES) and director Thomas Schmidt was a second unit director for John Struges on HOUR OF THE GUN and ICE STATION ZEBRA but passed away at age 35 with this being his only director credit. The music is by Tom McIntosh and there's a couple pieces of 70's AM fluff with one titled "Fantasy in Love" that's played ad nauseum throughout the film (much like the newscasts) and is guaranteed to begin grating on one's nerves well before the closing credits. The two bikers Will fights in the bar wear the Devil's Advocates colors on their jackets from THE LOSERS and some footage from that film shows up in Will's flashbacks.
The film also features some odd poster designs with one picturing the girls disembodied heads floating in a hippie prayer circle while a second one has a spoiler filled illustration of the climax's axe killer. Scorpion issued this on a now OOP DVD with it's more common HOT SUMMER WEEK title card along with a trailer, alternate titles and an interview with writer David Kauffman. 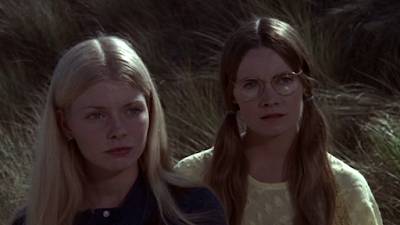 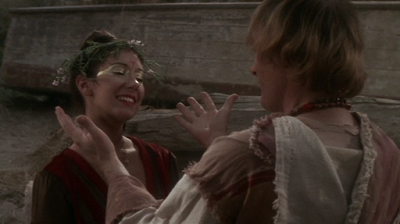 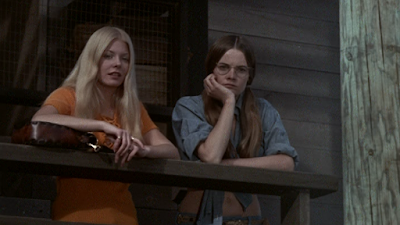 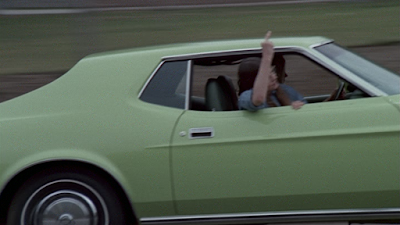 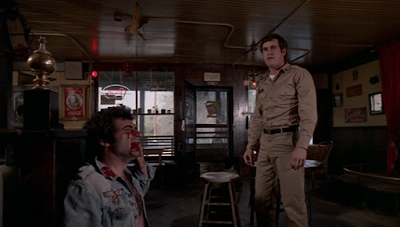 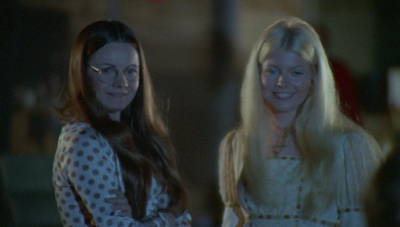 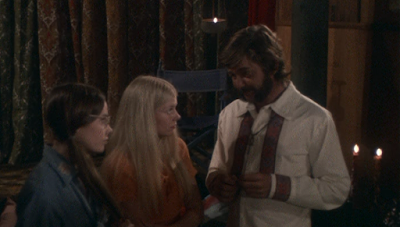 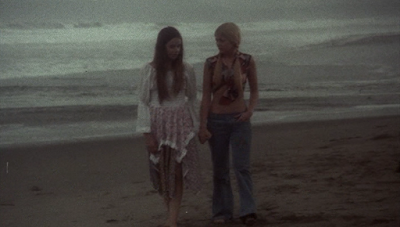 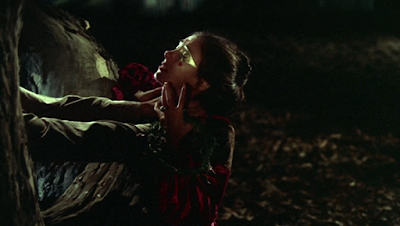 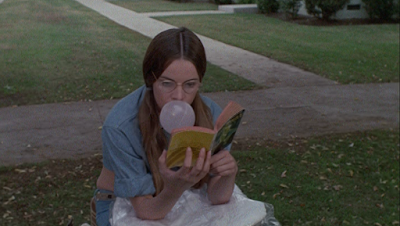 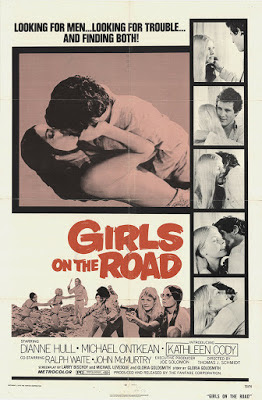 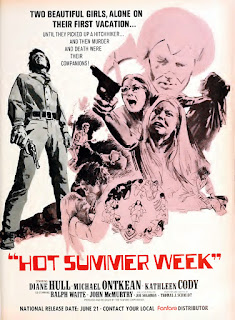 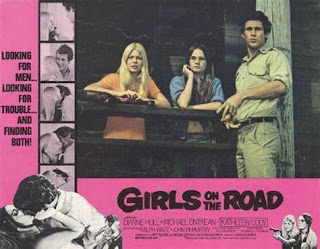 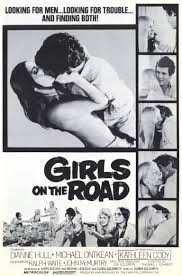 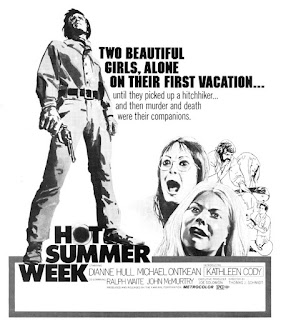 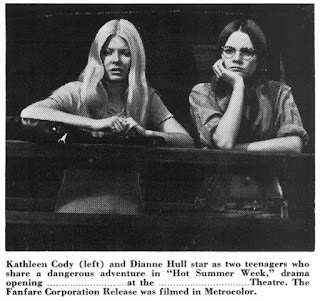 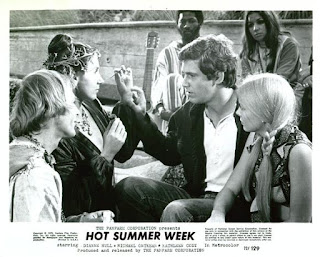 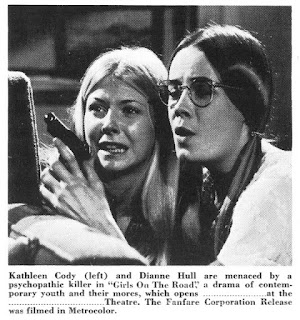