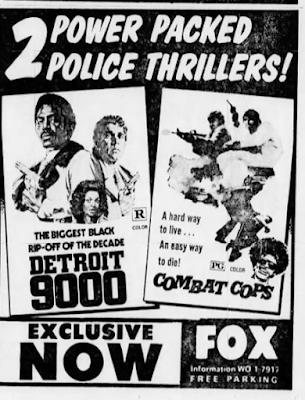 There's a double feature of COMBAT COPS (aka THE GET-MAN aka THE ZEBRA KILLER) and last year's DETROIT 9000(aka POLICE CALL 9000) at The Fox.

In most other markets DETROIT 9000 (Visit the murder capital of the world--where the honkies are the minority!) was playing as POLICE CALL 9000 but for the added publicity the original title was kept for its hometown run. COMBAT COPS ("Savage and Wilson are Combat Cops! A Hard Way To Live... An Easy Way!") was directed by the great William Gridler (ASYLUM OF SATAN & GRIZZLY!) and was re-released by Arthur Marks under several titles but never really caught on with audiences. It's a solid little police action thriller concerning a serial killer and is one those mega-violent 70's PG movies that would easily get an R today. 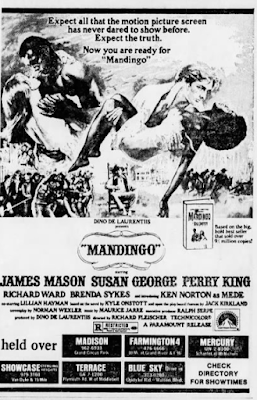 One of the more controversial releases of the decade and in addition one of the grimiest films ever released by a major studio MANDINGO ("Now you are ready for "Mandingo!") is being held over at several are theatres.

Directed by Richard Fleischer (20,000 LEAGUES UNDER THE SEA) and it features heaps of nudity, some still shocking sequences and a great performance by Susan George that tends to get lost in all the sleazy goings-on. James Mason later admitted in only appeared in it in order to cover his alimony payments. According to IMDB Sylvester Stallone appears as an unbilled extra although I've never been able to spot him. 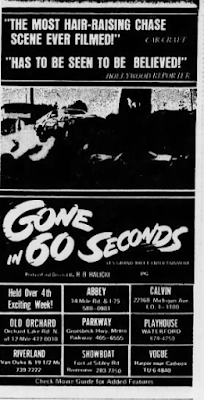 H.B. Halicki's great GONE IN 60 SECONDS ("See 93 cars destroyed in the most incredible pursuit ever filmed!") is still getting lots of playdates 4 weeks after its opening and would continue racking in money for years (I first saw it the next year on a dbl. feat. with THE GUMBALL RALLY).

Halicki would tragically die in 1989 while filming a sequel. 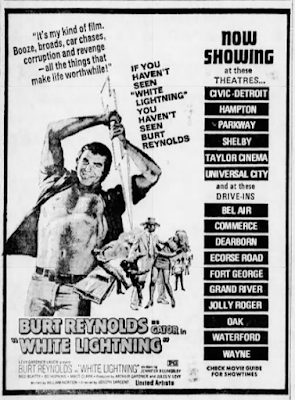 Proudly bearing its 70's PG rating the violent and surprisingly downbeat WHITE LIGHNING ("WHITE LIGHTNING never strikes twice - 'cause once is enough!") from the previous year is getting re-released. Starring a just on the cusp of mega-stardom Burt Reynolds and directed by Joseph Sargent it would continue to play at drive-ins (particularly in the south) well into the 80's. Burt would follow it up in 1976 with the slightly more family-friendly GATOR. 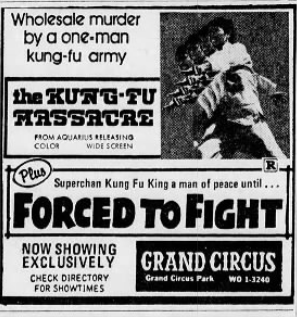 Downtown at the Grand Circus is THE KUNG-FU MASSACE ("Wholesale Murder by a one-man kung-fu army!") from 1974 and FORCED TO FIGHT from way back in 1971. 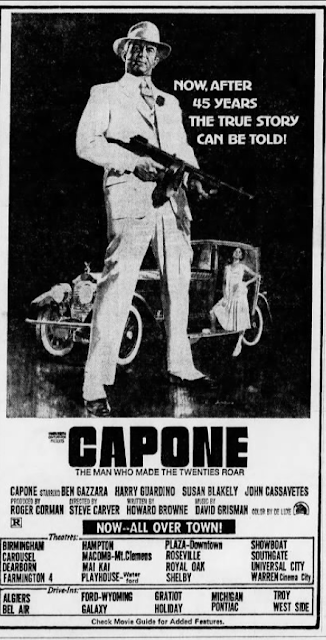 Getting a wide release is CAPONE starring a scenery-chewing Ben Gazzara. Directed by Steve Carver it was produced by Roger Corman as part of his deal with 20th Century Fox which resulted in Roger Corman New World type films with a bit more gloss and budget. 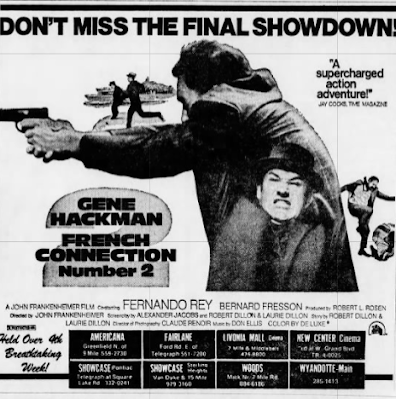 John Frankenheimer's underrated THE FRENCH CONNECTION II (or as billed here "Number 2") is still in wide release as it enters its ninth week. One of my favorite roles by Hackman it's an intensely gritty film and the withdrawal sequence is still harrowing.

Considered "unfilm-able" for decades director John Schlesinger & writer Waldo Salt's take on Nathaniel West's nightmarish novel of the dark underbelly of the 1930's Hollywood dream factory is being held over at 6 local theaters from its May premiere.

At the Palms (which in now The Fillmore concert hall) is an interesting double feature in the Israel/U.S. co-production of LEPKE starring Tony Curtis and directed by a pre-Cannon Films Menahem Golan.
The second feature is one of my favorite Blaxploitation films BLACK SAMSON on re-release from 1974 ("If you mess with the 'hood, he'll mess with you!") and starring Rockne Tarkington and the always welcome presence of the wonderful Carol Speed. 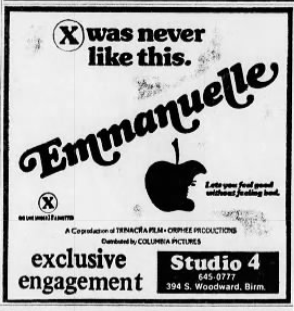 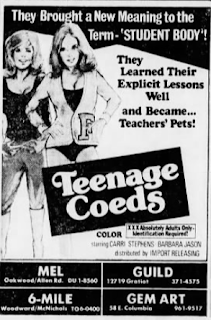