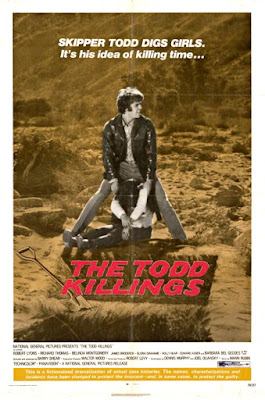 "Right out of today's headlines! The youth cult...the buried bodies...the shocking impact of what is happening now!" 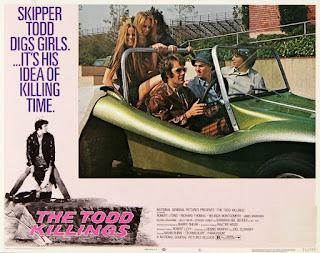 Released in the midst of that early 70's sub-genre of murderous teens (or hippies) that came about post-Manson, THE TODD KILLINGS was based on the case of Charles Schmid ("The Pied Piper of Tucson"), who as a 23-year-old high school dropout in the mid-'60s killed several young girls in the region around Tucson, AZ. while using his Svengali-like hold over a group of local teenagers to help him dispose of the bodies.

Directed by Barry Shear (ACROSS 110TH STREET) and written by Dennis Murphy & Joel Oilansky, it stars Robert F. Lyons (AVENGING ANGEL 1985) as "Skipper" Todd a charming early twenties sociopath who becomes the social leader of a group of teenagers in a small California town. Featuring a terrific cast consisting of new faces including a pre-WALTONS Richard Thomas plus the wonderful Belinda Montgomery along with veterans Gloria Grahame (THE BIG HEAT), Barbara Bel Geddes (VERTIGO), Fay Spain (DRAGSTRIP GIRL) along with Ed Asner, Michael Conrad, and in perpetuum heavy William Lucking.

The film starts out with a deliberately disjointed storyline as we're shown three young people disposing of a body in the nighttime desert which is intercut with a police interrogation along with a mother reporting her missing daughter. As the group drives away immediately we see their hierarchy which includes the leader "Skipper" Todd (Lyons) and his two sycophants - Norma (Holly Near ANGEL, ANGEL, DOWN WE GO), a girl with obvious self-esteem issues who clings to Todd both physically & emotionally (and to whom he treats with a cruel indifference) and a toady named Andy.

Todd holds sway over the youth of a small California town whose main diversions include cruising the local main street or hanging out at a nightspot. Being several years older than them, they seem to look upon him with almost reverence as he strides among them like a wanna-be-God as he even arranges for sexual hook-ups between the teens (and himself). An aspiring rock star who spends his spare time writing (without too much conviction it would seem) songs, he tools about town in a purple dune buggy dressed in mod clothes while sponging money off his mother (Barbara Bel Geddes) who operates a somewhat lower-end retirement facility. There are some parallels to Manson, as he also had dreams of rock stardom and controlled the sex lives of his followers.

At the start of the film while returning from the desert burial Todd and his two cronies pick up Billy Roy (Richard Thomas) a youth who knows Todd and is returning home from reform school. Todd drops off Billy Bob at and his home and charms his mother (Gloria Grahame). We never learn what Billy Roy was in reform school for (although we get the feeling that it involved a girl) and his shaved head & denim work clothes suggest a prison more than "reform school". It's here that we witness the off-kilter atmosphere of the town with that will continue through the film with oblivious adults & teachers along with young people devoid of a conscious all of which paint a very dark picture of American family life.

Billy Roy, who is in awe of Skipper's magnetism with women, is attracted to a woman he remembers from school (Sherry E. DeBoer THE VELVET VAMPIRE) and he awkwardly tries to attract her while being prodded on by Skipper. At the same time Skipper is devoting much of his time to breakdown the refusal of high schooler Roberta (in a very nice performance by Belinda Montgomery) to surrender her virginity. Throughout this Shear intercuts scenes of Skipper's interrogation by detectives Michael Conrad (UN FLIC) and William Lucking (HELL'S BELLES) and it's revealed that one of his minions has turned him in.

Although we see the killings and they are brutal, Shear does it more with restrained terror than outright horror that while this is to be commended for not using these to rub the viewers face in them, it doesn't begin to convey the shocking true events. It's this combined with Lyon's low-key approach to the killer is that causes the film to miss its mark as one of the great true crime films of the era. The actual Charles Schmid was short of stature and filled his cowboy boots with crushed cans and cardboard in order to appear taller while sloppily applying putty to make his nose appear bigger and painted a large mole on his cheek. Has this been incorporated into the film's plot it would be for a more bizarre (and interesting) killer as the movie version comes across as a murderer but one who's cool, polite to the elders, just slightly creepy as a result come across like a murderous Eddie Haskell.

Despite the above mentioned, this a is an interesting hidden 70's gem, well worth a look, and deserves more recognition. Lyons gives a fine performance in what is an underwritten part and Belinda Montgomery stands out in her performance as the focus of Skipper's interest and it's always great to see Gloria Grahame even in a small role (you really wish that both she and Bel Geddes were given larger roles). THE TODD KILLINGS is available from Warner Archive on a MOD DVD. 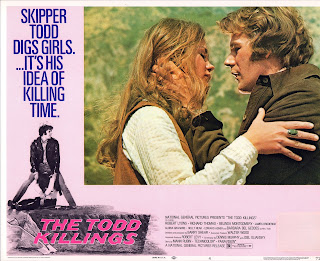 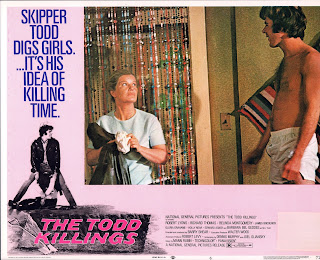 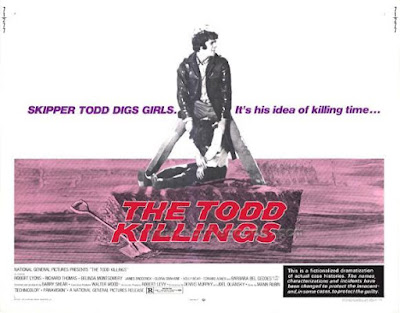