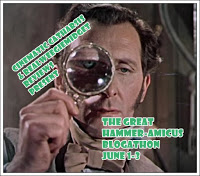 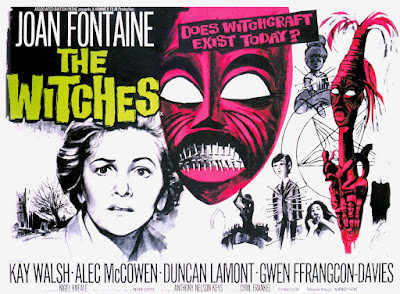 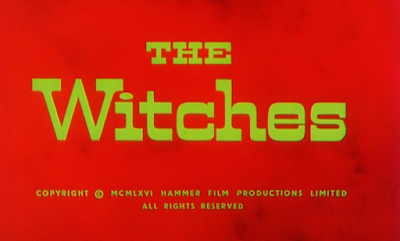 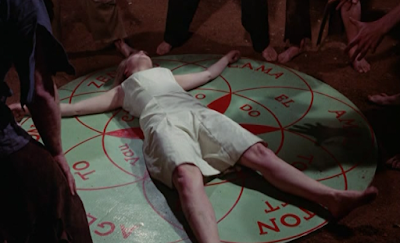 THE WITCHES is often one of those Hammer films that fall through the cracks and although it doesn't stack up to that studio's other forays into witchcraft & folk horror such as THE PLAGUE OF THE ZOMBIES (1966) and THE DEVIL RIDES OUT (1968), it does feature a keep you guessing script by Nigel Kneale (QUATERMASS AND THE PIT and THE STONE TAPE) and an earnest and serious performance by Joan Fontaine. It also shares the injection of African/voodoo religions injected into the British countryside that was explored in the same years THE PLAGUE OF THE ZOMBIES. Filmed in Buckinghamshire it has beautiful Technicolor English countryside and although some interiors were filmed on some familiar Bray it does have a look, unlike most other Hammer productions, in addition, being a contemporary horror setting rather than a period one.
The film could be looked upon as Fontaine's entry in the "hag horror" genre that was flourishing at the time as studios looked to golden age Hollywood actresses for Gothic and horror/thriller box office - with Joan's sister Olivia De Havilland in HUSH...HUSH, SWEET CHARLOTTE, and LADY IN A CAGE from 1964. This was Joan's last movie role and her last acting until she started showing up on TV in the mid-'70s. She's credited as a co-producer on THE WITCHES and owned the rights to Norah Loft's source novel THE DEVIL'S OWN (which was the U.S. title as distributed by 20th Century Fox). 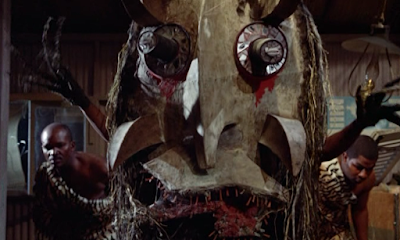 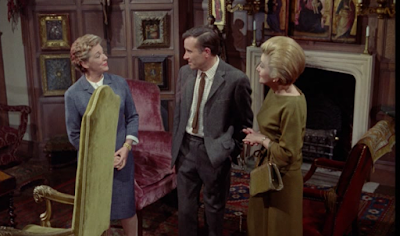 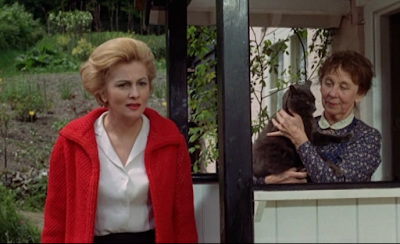 Fontaine plays Gwen Mayfield a teacher who just returned from Africa wherein a prologue sequence her school was attacked by a fearsome mask-wearing witchdoctor during a tribal rebellion. Back in England, she meets up with Alan Bax (Alec McCowan FRENZY) a vicar who along with his sister Stephanie (Kay Walsh (DR. SYN) who runs a school in the small village of Heddaby she takes a job as a teacher. Arriving in the village she discovers that Bax really isn't a vicar ("I wanted to enter the church, but I failed") and the rectory is in ruins.
As school begins the only other teacher Sally Benson (Ann Bell DR. TERROR'S HOUSE OF HORRORS) is mysteriously late in arriving and a burgeoning romance between two of the young students Ronnie (Martin Stephens VILLAGE OF THE DAMNED and THE INNOCENTS) and Linda (Ingrid Bolting) is frowned upon by both the parents and the villagers. Kneale's script (which Robin Hardy's THE WICKER MAN resembles) is wonderful in showing how slightly odd the village is and the slowly encroaching way in which Gwen begins to realize something is not right. Kneale was always good at showing the effects that paranormal or occult beliefs could have on modern society and how non-believers would slowly come to the realization that logic can't explain them away. The film also touches on the "sins of colonialism" that other horror films such as THE OBLONG BOX (1969) would explore. 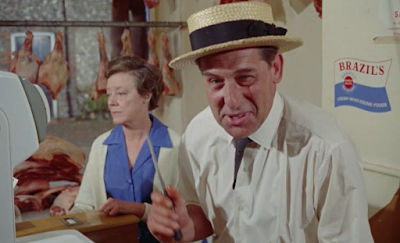 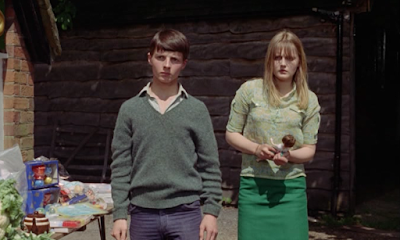 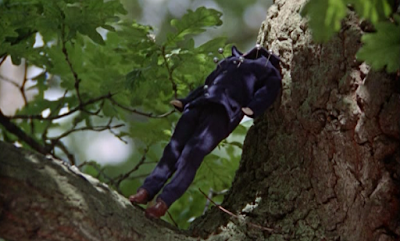 The feeling of dread is beautifully maintained through the first part of the film with such things a headless doll in the crock of a tree and oddly enough a sheep stampede and the opening Africa sequence is pretty terrifying. The plot comes apart a bit toward the end of the movie with interpretive dancing and a bizarre climax that will have you re-watching it just for Kay Walsh's off the rails performance one of the more out-there devil-worshipping sequences ever committed to film. Walsh (who at one time was married to David Lean) almost walks away with film with a performance that grows more bizarre by the minute, although Fontaine is quite good and carries an air of old Hollywood glamour about her even while recoiling and screaming in the face of occult puppets.
With Arthur Grant's cinematography, it's a beautiful looking film and the bright sunshiny exteriors contrasting with the dark goings-on in the village.  Although Hammer's bare breast and blood era were still a few years ahead even for 1966 THE WITCHES seems a bit chaste as we get a fully clothed orgy.  Director Cyril Frankel also directed the powerful NEVER TAKE SWEETS FROM A STRANGER in 1960 for Hammer and THE WITCHES is filled with a host of familiar English faces including Duncan Lamont from QUATERMASS AND THE PIT ("are you insured..?, it's good to be insured...) as a grinning almost maniacal butcher who gleefully skins rabbits and Leonard Rossiter (DEADLIER THAN THE MALE 1967) as the village doctor. 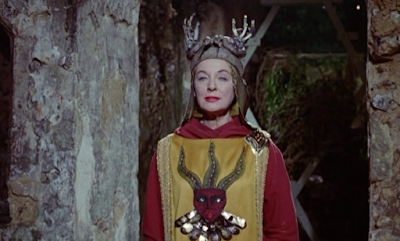 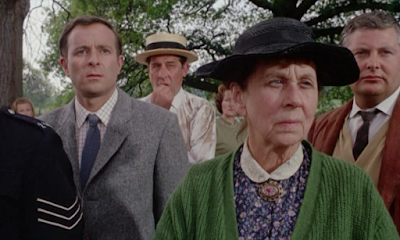 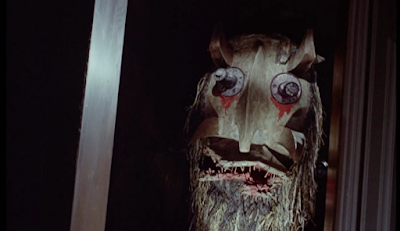 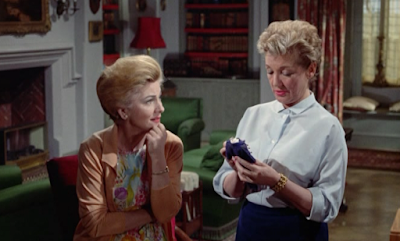 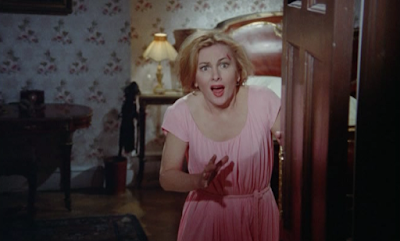 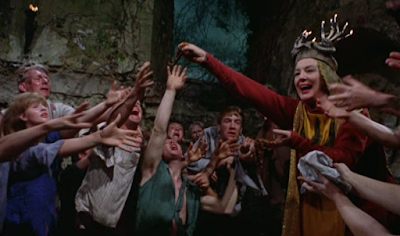 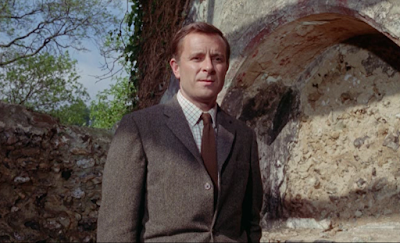 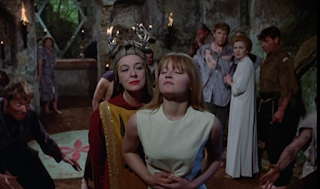 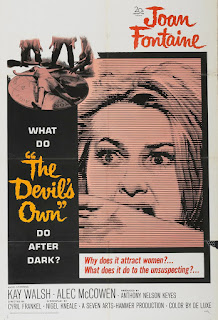 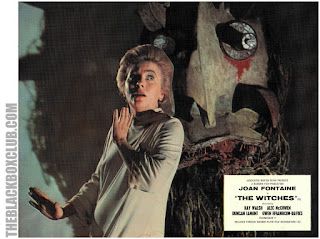 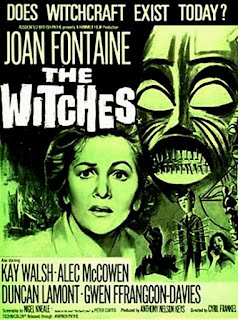 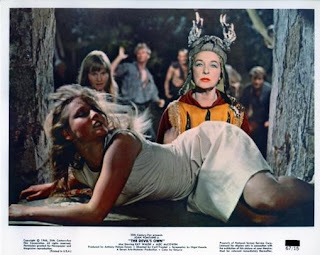 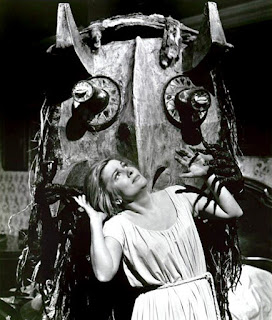 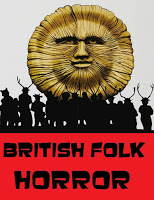