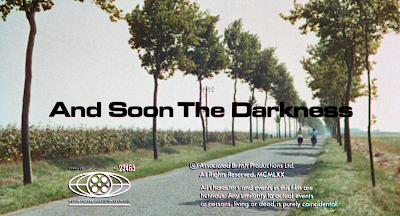 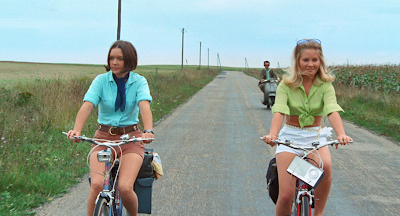 One of the more underappreciated and underseen thrillers of the '70s and taking the unusual tact of unfolding almost entirely in the bright sunshine of the French countryside, AND SOON THE DARKNESS, takes a simple economical plot concerning two women alone on a biking holiday who slowly come to the realization that they're being stalked by an unseen perpetrator with the universal fear of being isolated in a foreign country where you don't speak the language.
Two young English nurses Jane ( Pamela Franklin THE INNOCENTS)  and Cathy (Michele Dotrice THE BLOOD ON SATAN'S CLAW) are on a holiday bicycling through the French countryside of the Lorie Valley. Although obviously "work friends" it's apparent straight away that the two women are opposites in what they expect out of their vacation. The dark-haired Jane is the more practical one wanting to stick to a schedule while Cathy just wants to spend time relaxing and meeting men. The film neatly sets up the premise that neither girl is at fault for their strained relationship or is a bad person, they are simply two people who probably shouldn't be traveling together. 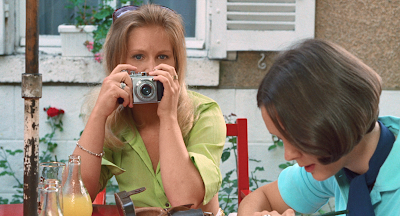 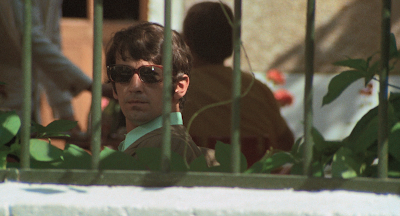 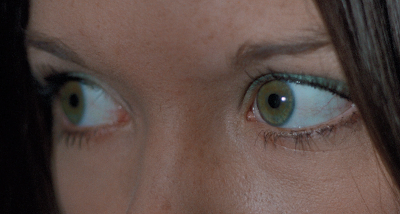 Stopping at a roadside cafe they catch the eye of a young man astride a moped (Sandor Elès COUNTESS DRACULA) who seems to be following them in a roundabout fashion as they continue their journey. Cathy and Jane begin to squabble with Jane wanting to press on to the next village while Kathy would lay about in sun and (hopefully) meet up with the stranger on the moped. The pair decide to split with Jane pedaling onward while Jane stays behind for a nap and some sun. Laying about in the woods Jane put her laundry out to dry and soon ominously finds a pair of her panties missing, her bike disabled and in a wonderful shot, we see a shadow quickly pass over her face.              Becoming concerned Jane returns and not finding Cathy she makes inquires at a small hotel run by an elderly woman (Hana Maria Pravda) who while not speaking English does project a sense of dread as Jane (and us the viewer) are only able to catch the words "bad road". The film cleverly does not use subtitles so we immediately can empathize with Jane and only are able to gleam the same small snatches of information that she does. She eventually finds an ally in the form of a visiting English schoolmistress (Clare Kelly GEORGY GIRL) who informs Jane that a local young woman was murdered along the same stretch of the road the previous year (and who bears a striking resemblance to Cathy).
Directed by Robert Fuest (THE ABOMINABLE DR. PHIBES) and written by Brian Clemens (DR. JEKYLL AND SISTER HYDE) both of whom had worked on THE AVENGERS TV show, this couldn't have been farther from Fuest's Art Deco horror of the Phibes films or the futuristic sci-fi spy-vibe of THE AVENGERS. Set almost enterally along a long stretch of lonely road and making wonderful use of the sunny countryside it makes use of a deceptively simple premise which unfolds in realtime after Cathy's disappearance. Without his art-deco flourishes, Fuest instead relies on lighting and composition along with the sights and sounds of the French countryside all of which in spite of the bright sunshine hint at something forbidding lurking just offscreen. The film also conjures up a suspenseful feeling of isolation and dread as the wide-open countryside although green and sunny provides no sanctuary for Jane. The film's advertising really played up the Hitchcock angle, name-dropping him in some of the taglines, and his name was featured prominently on the poster artwork. 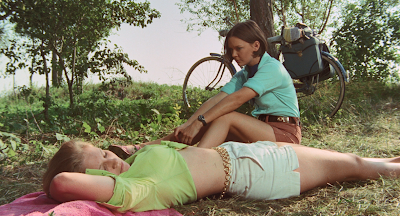 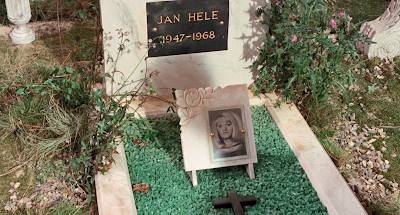 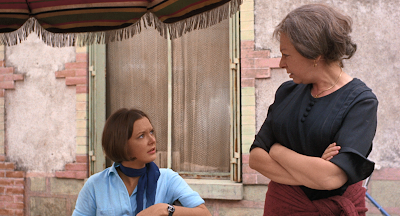 Throwing up red herrings with every character introduced the film has a distinct Giallo-like feel to it with Sandor Elès's mysterious sort-of "detective" character astride a Vespa and always lurking in the background could have come right out of a  classic Italian Giallo along with the unknown sense of dread and ambiguity. Fuest doesn't throw out bunches of jump scares but instead relies on a slowly amping of dread to fuel the viewer's unease. The scene with Cathy alone in the woods and being slowly stalked is a textbook example of how to unfold a suspenseful sequence by resorting to screaming and bloodshed. Even though unfolding almost entirely in bright sunlight the sense of desolation and isolation is quite palpable with the longs miles of empty country roadway with no other person in sight. The location filming helps immensely with the lone process shot of Jane and the schoolmistress driving in a car sticking out.
The cinematography by Ian Wilson (CAPTAIN KRONOS VAMPIRE HUNTER) is also very evocative with subtle uses of changing lighting and framing that gives a sense of something or somebody lurking just off-screen. The trick here is that it would be easy for the film to fall into repetition with its basic story and shots of an empty road, but director Fuest & co-writer Clemmens (along with cinematographer Wilson) do keep the film moving along with their inventive use of the space and locations. But there does feel like about 15 min. or so could have easily been cut as Jane's many meetings with the kind-of-crazy locals/red-herrings do drag a bit with one in particular with a fidget inducing drawn-out encounter.
As the two leads both Pamela Franklin and Michele Dotrice are excellent with Franklin especially fine in the latter half of the movie where she literally carries the entire narrative alone often time with long stretches of no dialogue using just her body language and facial expressions to carry the narrative. A very gifted actress Franklin had first come to notice in Jack Clayton's superb THE INNOCENTS in 1961 and would later appear in THE LEGEND OF HELL HOUSE in 1974 with her career winding down with TV work later in the decade before retiring in the early '80s. In 1967 she appeared in the sadly underseen OUR MOTHER"S HOUSE which is a film ripe for rediscovery.
Dotrice appeared in two of the better British folk-horror entries with BLOOD ON SATAN"S CLAW from 1971 and Hammer's THE WITCHES in 1966. She continues to work on the BBC quite regularly.
In 2010 in a version best avoided, AND SOON THE DARKNESS was remade transporting the plot to South American with two American women is the object of peril. 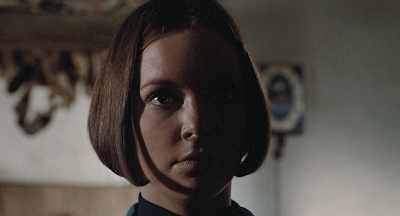 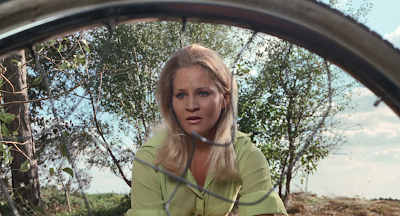 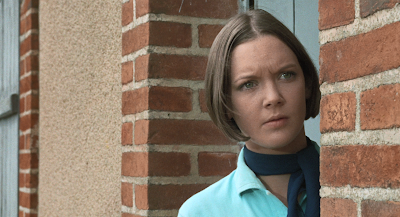 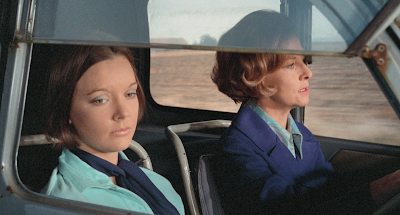 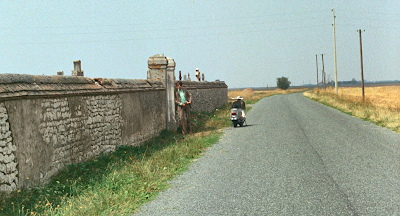 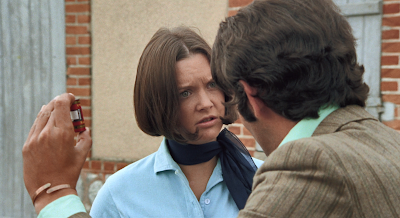 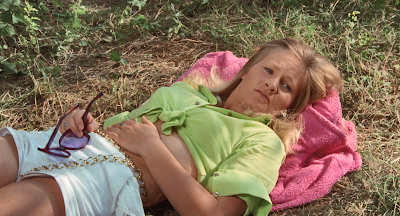 All screencaps above are from the Kino Blu-ray 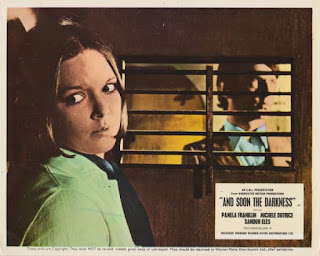