AKA VENGEANCE IS MINE or BLOOD FOR BLOOD

Farmer Ernie Borgnine breaks out the trusty ol' double barrel shotgun to square off against a trio of on the lam bank robbers including an off the rails & psychotic Michael J. Pollard !! 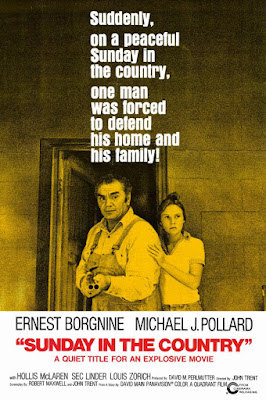 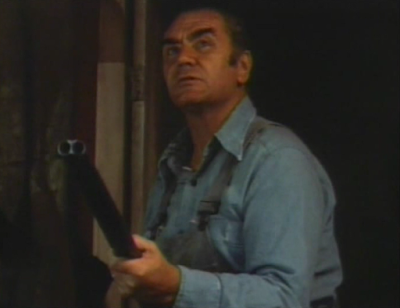 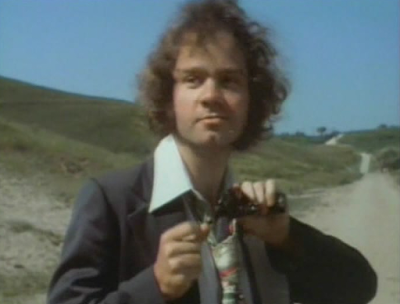 During the '70s and '80's Canada was a pretty fertile breeding ground for low budget horror/exploitation films. Tracing their linage back to 1961's THE MASK  films such as CANNIBAL GIRLS (1973), DEATHDREAM (1974), HUMONGOUS (1982), THE CREEPER aka RITUALS (1977) and MY BLOODY VALENTINE (1981) (along with David Cronenberg's early work) among many others were all products of the "Great White North" film industry. With the exception of Cronenberg's films and 1973's THE PYX (which seemed to revel in its nationality), many of them tried to disguise the fact that they were Canadian in origin as they did their best to portray a nameless North American location.
Filmed in Ontario, but portraying a non-specific rural Midwest America, Borgnine here plays Adam Smith a no-nonsense humorless farmer who lives alone with his granddaughter Lucy (Hollis McLaren WELCOME TO BLOOD CITY ). College-age Lucy is home for the summer and comes across as a bit of a hippie while her stern Grandfather represents a more straight-laced conservative way of life as he always reminisces about the "good old days". At one point he even berates Lucy for using a recipe out of a book to cook their meal. It's never explained exactly why Lucy is living with her grandfather and what the family dynamics are at play here, but it's hinted that Borgnine's wife left him because of mental and/or physical abuse. 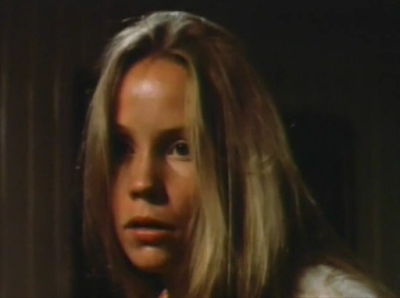 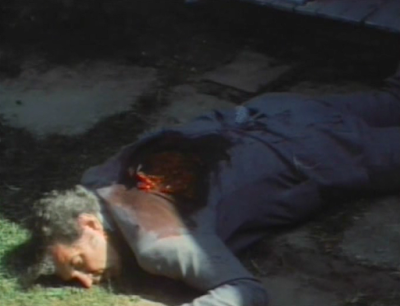 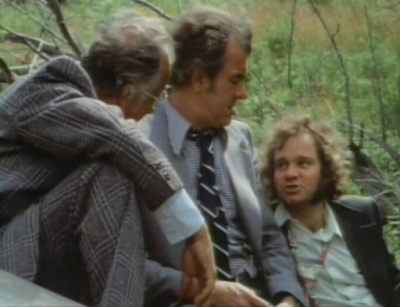 On their way to church early Sunday morning they hear radio reports concerning a trio of bank robbers who are on the run in the area after a robbery in which a teller was shot and killed. The trio includes the older men Dinelli (Louis Zorich) and Ackerman (Cec Linder GOLDFINGER) and the younger Leroy (Michael J. Pollard LITTLE FAUSS AND BIG HALSEY). While looking to switch cars they come across a young couple changing a tire and Leroy viciously shots the man and attempts to rape the girl before being stopped by his cohorts (after which she is brutally shot point-blank). It's also revealed that the psychotic Leroy shot the teller at the bank and is looked at with a combination of contempt and fear by his two older partners.
Stealing the car they attempt an escape but because of police roadblocks they're forced to head off cross country and end up on the Smith farm. The film up to this point would seem to be setting up a standard home invasion plot, but this is where things take a bizarre turn. Posing as stranded motorists, the trio approaches the farmhouse, with Borgnine inviting Ackerman in to use the phone and then blows the bank robber out of the kitchen and through the door with a shotgun blast. Taking the other two hostages (aided by his hulking mute farmhand Luke played by Vladimir Valenta) he forces them to remove their pants and chains them up atop a manure pile! 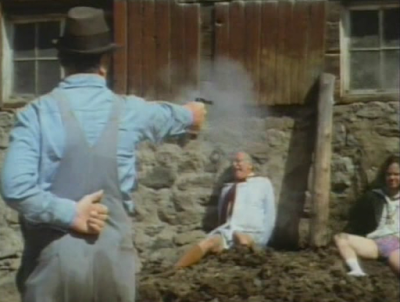 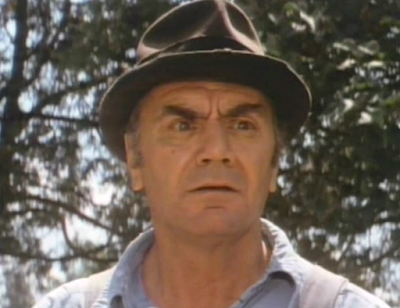 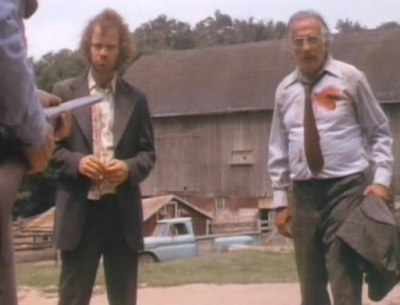 Later moving them to a basement and tying them to the rafters, Borgnine doesn't seem to be in any hurry to call the police and at this point, we still don't know what he has in mind for the hostages as his seemingly calm exterior along with our wondering what's going on behind that grin and penetrating stare all make for some slowly ratcheting tension. Meanwhile, Lucy becomes highly uncomfortable with the situation, prodding her grandfather to call the police while he calmly maintains he's going to the handle things "in due time...". Lucy had shown a bit of rebellion earlier in the movie in regards to romantic relationships with a local suitor and with her ever-escalating friction with her father over the fate of his captives she begins to realize that she's just as much of a prisoner as they are. 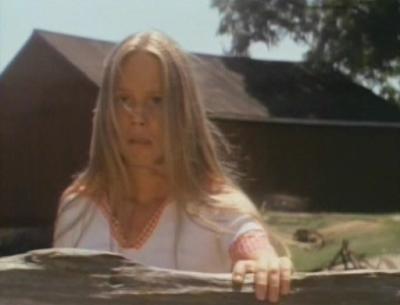 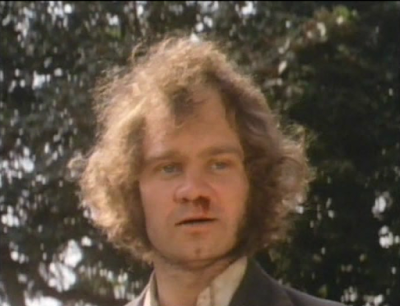 In one of his best post WILD BUNCH roles Borgnine alternately terrorizes and dishes out folksy wisdom to his prisoners while never letting them (or us) in on what his actual intentions are, although as mentioned before, there's something lurking behind that unsettling grin and calm personality. His name "Adam" even seems to invoke some sort of Biblical retribution. Playing out in pretty much real-time, unsettling anxiety slowly builds up with an arbitrary coin toss that seals the fate of one character and a bloody contest featuring a couple of attack dogs.
With his pudgy face and goofy grin, Pollard built an entire career playing seeming simple-minded characters who often have an undercurrent of something creepy lurking in their personalities. He also had the rather unique quality of quietly stealing whatever movie he's in (just watch him in BONNIE AND CLYDE for a superb example of this). Here he plays an obviously evil psychotic killer but still with a certain child-like quality about him.
The ending twists through to something quite unexpected and leaves us conflicted about Borgnine's character and his motives. Although the film's end seems to justify his actions and perhaps speak of a stronger past history before the encroachment of looser values of the younger generation (as represented by Lucy and to some extant Pollard) by keeping Borgnine's character not wholly sympathetic helps raise this above the expected story line.

Director John Trent also helmed the very good 1971 made for TV thriller ONLY WAY OUT IS DEAD and the score features some ominous country music by Paul Hoffert & William McCauley.
I found this recently on a DVD (with the video generated title VENGEANCE IS MINE) in a $3.00 bin at a truck stop where it's paired up with Terence Young's infamous THE KLANSMAN (also from 1974) - both of which make for a pretty bizarre Dbl. feature. Seeming to be the only option out there currently, sadly the pan & scan transfer destroys the film's widescreen Panavision compositions and looks to be from a home videotape source. 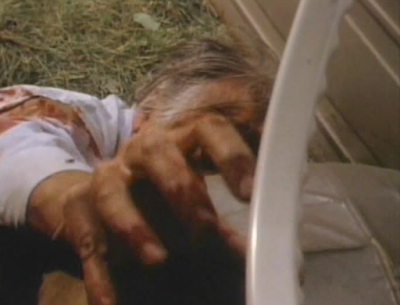 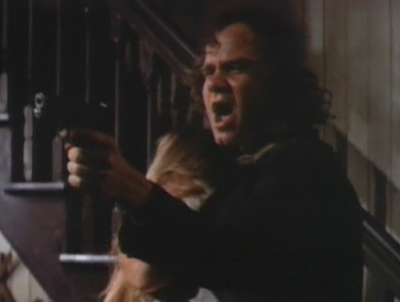 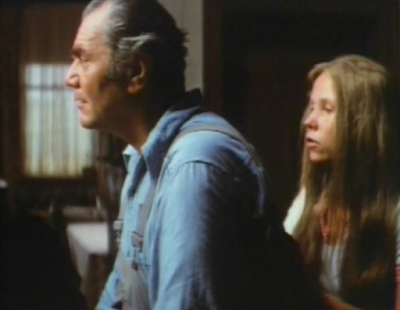 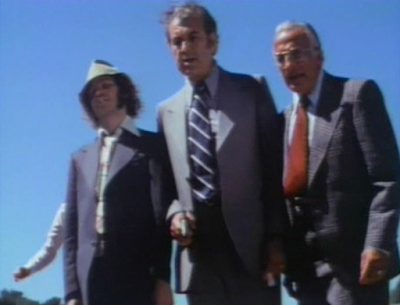 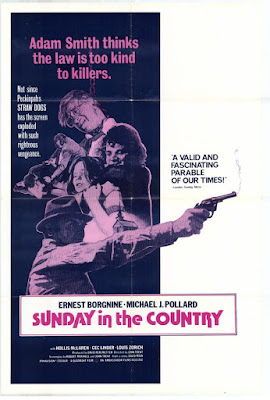