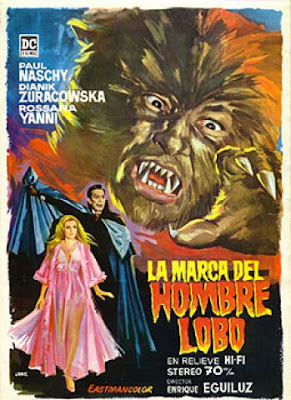 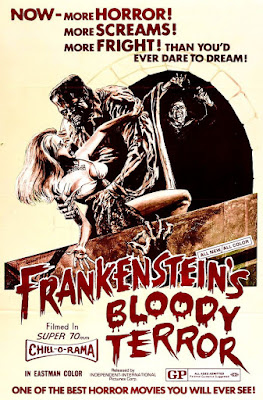 The American release was shown in "Super 70mm Chill-O-Rama" !
(which I'm sure is a whole creepier then regular 70mm !)

Although not the first Spanish horror film, 1968's LA MARCHA DEL HOMBRE LOBO (MARK OF THE WOLFMAN) was arguably one of the films that kick-started that genre's golden age in the coming decade. In addition to being his initial foray into horror, this was Paul Naschy's first portrayal of the tortured nobleman/werewolf Waldemar Danisky. Backed by some healthy German financing it was shot in 70mm along with 4 track stereo, with even a 3D version being produced. Like many of his future films, this was scripted by Naschy under his given name of Jacinto Molina.
At first glance, Naschy would seem to be an odd choice for a leading man in Gothic horror, as the former championship weightlifter was short, stocky and barrel-chested with an obvious comb-over (that's even more apparent as his films make the transition to HD). He did, however, have a magnificent screen persona as with his dark brooding looks and piercing eyes he was able to project both an aura of sinister evil along with a melancholy sadness in his characters.
Released in Europe in 1967, this was picked up in 1971 by producer Sam Sherman for release in the U.S. as a co-feature to Al Adamson's woeful DRACULA VS. FRANKENSTEIN. Sherman had promised his distributors a "Frankenstein" film for the double bill and as his production of a proposed 2nd feature fell through he looked to acquire an overseas production that he could re-tile. All of which makes it odd that he chose a movie with no Frankenstein monster in it - and even more bizarrely he passed on Tuilo Demicheli's 1970 "monster rally" type feature ASSIGNMENT TERROR which included a Frankenstein type monster, along with Naschy's werewolf (plus Dracula and a mummy !).

MARK OF THE WEREWOLF serves up two werewolves along with a male and female vampire, but Sherman was bound and determined to give the audiences a Frankenstein monster in some form. In a great piece of showmanship, he tacked on a crudely animated prologue which explains that the Frankenstein family was cursed and branded as "Wolfsteins"(!) and in addition lopped-off the two opening reels to get it down to a more double feature friendly length, along with tacking on an appropriately lurid title in FRANKENSTEIN'S BLOODY TERROR. All this means that the film contained no Frankenstein monster, which must have left some patrons feeling a bit gypped (but with that being said, they might have also felt a bit gypped after seeing the co-feature DRACULA VS. FRANKENSTEIN).
Although taking place in contemporary times MARK OF THE WOLFMAN, like many a Euro-horror film, seems to exist in a strange nether-world where jet setting rich folk dash about in sports cars and live in richly appointed Gothic estates while gypsies in period costumes trod about in horse-drawn wagons and everybody speaks about ancient curses, vampirism and lycanthropy matter-of-factly with no doubt to their existence.

Directed by Enrique López Eguiluz (this being his only genre film) and beautifully shot by Emilio Foriscot (who was the later cinematographer on Sergio Martino's THE CASE OF THE SCORPION'S TAIL and THE STRANGE VICE OF MRS. WARDH) this is one of the more gorgeous looking Spanish horror films of the period. Shot in some of the same locations as TOMBS OF THE BLIND DEAD (the El Cercón Monastery in Madrid) characters are often framed in medium and long shots in order to show the fantastically designed & lite Gothic ruins and opulent rooms.
The film opens with a masquerade ball in the home of the young Countess Janice von Aarenberg (Dyanik Zurakowska THE VAMPIRES' NIGHT ORGY and THE HANGING WOMAN) who's dancing with her just returned from school boyfriend Rudolph. Naschy's Waldemar Danisky bursts into the party (dressed as a satanic Robin Hood) and immediately sets his eyes on the young Countess which causes concern for Rudolph. The fathers of Rudolph and Janice also look on with disdain as Danisky has a reputation locally as a shady character (it's these sequences that were exercised by Sherman).
Over the course of the next few days, Danisky continues to coincidentally "run into" Janice and shows both her and Rudolph around his ancient family estate where he relates the legend of a cursed ancestor who is buried in the family crypt. Later a very colorful and over the top gypsy couple take refuge in the castle and looking to steal some treasure, they open up the tomb of the cursed relative and upon removing a silver dagger from his chest they allow him to be reborn as a werewolf.
As the werewolf begins to bloodily ravage the countryside the villagers gather together for a wolf hunt with Danisky being wounded by the werewolf while saving Rudolph's life. Now cursed with being a werewolf Danisky starts his bloody rampage, while Rudolph feeling indebted to Danisky, attempts to help him find a cure. Added by Janice they locate a document that references a Dr. Mikhelov who may have a cure. Realizing the doctor is now dead they write to the address and soon the a mysterious Dr. Janos Mikhelov (Julián Ugarte from ALL THE COLORS OF THE DARK) and his "assistant" Wandessa (the very beautiful Aurora de Alba who also appeared with Naschy in THE HANGING WOMAN and VENGEANCE OF THE ZOMBIES) show up. All of which set up vampirism, satanic rituals and a one-on-one werewolf fight to the death.

Even though this is Naschy's first outing as his famous alter ego it's pretty amazing to watch him here as hurls himself from the screen full force. Like Christopher Lee ten years before who had burst from Hammer's HORROR OF DRACULA with his highly athletic and sensually sadistic portrayal of the title character, here Naschy brings a highly charged ferocity to his werewolf. He leaps through windows, hurls himself full force at his victims and bloodily mauls them all the while growling and snarling (although the patented Naschy werewolf drool is not yet in play here).
As mentioned, this is one of the most beautifully shot films from the golden age of Spanish horror. Filled with weird Mario Bava like lighting with the camera seemed to literally drink up the Gothic atmosphere (there are several times you want to hit pause, just to study the set design). There are also several instances of quiet poetic like beauty such as Wandessa's seduction of Rudolph as a flowing satin veil slowly covers the couple and later as Janice and the vampire waltz through ruined catacombs as they move through various colors and swirling fog.

The female cast is beautifully filled out by Dyanik Zurakowska and Aurora de Alba with some special attention needed to be paid to de Alba. A bit more mature then most other horror actresses of the time (she somewhat reminisces of Helga Liné) and looking absolutely mesmerizing here, she brings a wonderful sinister sensuality to her role. She was also pretty unforgettable in VENGEANCE OF THE ZOMBIES and TERROR OF THE LIVING DEAD (aka THE HANGING WOMAN - which also co-starred Dyanik Zurakowska).
Some years ago Shriek Show released FRANKENSTEIN'S BLOODY TERROR on DVD which contained the long European cut (with English dub) along with Sam's animated prologue. Hampered by some uneven coloring and obviously coming from different film sources, it does contain an informative & fun commentary by Sherman as he relates the convoluted distribution of the film and says that he's still in possession of a 70mm 3D print. It's also been released in Germany by SubKultur (under the title DIE VAMPIRE DES DR. DRACULA) on Blu-Ray as part of their ongoing Naschy series.
This was my (as I'm sure it was many a "monster kids") first exposures to Naschy as it seemed to run almost continuously on my local late night 70's TV. The original ad campaign promised a free burial to anyone who died of fright while watching the film! 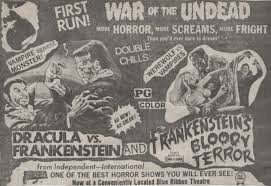 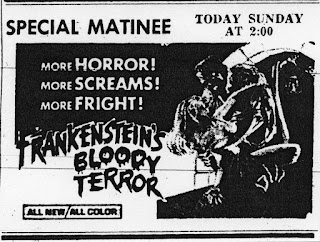 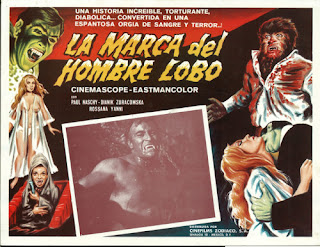 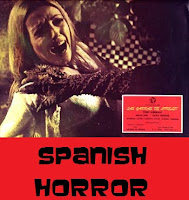