Here's future Italian giallo babe Barbara Bouchet throwing down some moves in 1965's In Harm's Way from director Otto Preminger. This was Barbara's first major role, playing the two-timing wife of Navy officer Kirk Douglas. In these, the opening scenes of the film, she's doing the wild drunk dance with Hugh O'Brian before heading off for some moonlight skinny dipping (complete with dashboard obscuring nudity). The next morning the pair are killed in a fiery wreak after being starfed by Japanese planes. Seems it was their bad luck to have picked Dec.7 1941 to wake up drunk on a beach in Hawaii.
In Harm's Way is kind of a schizophrenic affair with older Hollywood stars like John Wayne, Kirk Douglas and Henry Fonda doing the gung-ho war movie thing along with bunches of soap opera stuff including still at the time somewhat taboo plot points such as rape & in your face infidelity (along with Barbara's orgasmic like dancing and semi-nude skinny dipping).
Barbara did a few more movies & some TV stuff after this, then headed off to Italy where she stared in such classics as Black Belly of the Tarantula (1971), Amuck (1972 - with Rosalba Neri), The Lady in Red Kills Seven Times (1972) and Caliber 9 (1973). In 1959 she won the "Miss Gidget" beauty contest in San Francisco and was a dancer on the teen dance program KPIX Dance Party. She had a small role in Martin Scorsese's Gangs of New York from 2002. 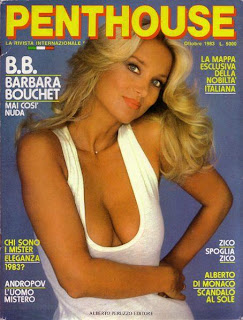 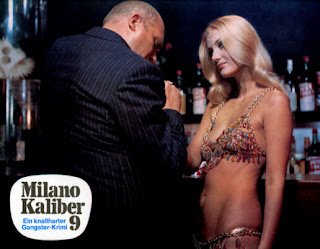