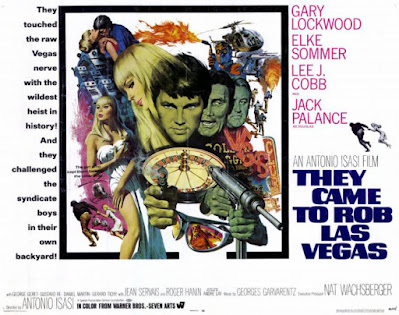 An oozing coolness Gary Lockwood and a gang of European character actors hatch out a heist plan to knock-off a hi-tech armored truck in this unjustly forgotten caper film. A French/Spain/Italy/West Germany co-production that also features Elke Sommer along with Lee J. Cobb and Jack Palance (in a rare good guy role) bringing some acting and publicity gravitas to the production. Lots of vintage Vegas exteriors and awash in 60's decor, it also features a script with some quirky & witty moments but at 129 minutes is kind of ponderous in places.

Opening with a COOL HAND LUKE-like frenzied escape through a swamp complete with angry dogs and shotguns, Gino Russo (Jean Servais RIFIFI 1955) makes good his escape via car and ends up in psychedelic 1960's L.A. where he looks up his younger brother Tony (Gary Lockwood 2001: A SPACE ODESSEY 1968). Gino tries to talk his younger brother into an armored car robbery on a heavily armored and fortified vehicle operated by the Skorsky Corporation, but Tony declines as he reminds the elderly Gino that times have changed and the caper is doomed to fail. Sure enough, Gino and his gang although armed with a bazooka (!!) are bloodily gunned down in a freeway overpass attempting the robbery while a gang of spectators including Tony watches impassively from atop the freeway.

Now in Las Vegas Tony works as a blackjack dealer at The Flamingo and is running a scam on the casino with Jill Bennett (Elke Sommer DEADLIER THAN THE MALE 1967) and planning a revenge caper on the Skorsky Corporation which is headed by Steve Skorsky (Lee J. Cobb MARC THE NARC 1975) whose specially designed armored cars (that looks like an armor-plated Winnebago) are used to transport money from Vegas to Los Angeles. Sommer's Jill Bennett is also the secretary/mistress of Steve Skorsky and it is with her that Tony will obtain the secret route timing of the money shipment. Adding another twist to the proceedings is that Skorsky is also using his armored trucks to transport gold for the Mafia which brings in Treasury Agent Douglas (Jack Palance RULERS OF THE CITY 1976) to start nosing around.

Tony brings together his gang to pull off the heist which includes a gaggle of familiar faces including Gustavo Re (SUMMERTIME KILLER 1972), Daniel Martin (A FISTFUL OF DOLLARS 1964), and Enrique Avila (PLAY DIRTY 1969). Unlike other caper films, there's not a lot of time here devoted to the actual planning as Tony just gathers his gang around a pool table and then marches them out to the desert with the long shots of men trudging over sand dunes giving a flashback of sorts to LAWRENCE OF ARABIA. The film also seems to draw upon the previous year's John Wayne/Kirk Douglas western THE WAR WAGON (which in actuality is a western caper film) as they both share a supposedly impregnable method of transporting money that's controlled by a corrupt power-hungry businessman.

With both the Treasury Agent Douglas and Tony looking to get into the armored truck it's inevitable that this leads to both of them trying it on the same day which leads to the film really kicking into gear with double-crosses, triple-crosses and I think even a quadruple cross(??)! When the film sticks to the nuts and bolts of the heist it is holding your interest but when it invariably moves to character interaction it falls a bit flat. There's a lot of Lee J. Cobb in his high-tech office building (which looks to be lifted right out of Euro-spy villains liar) yelling and growling at people along with some tedious filler toward the end and at 129 minutes it could have lost about 20 minutes easily.

Directed by Antonio Isasi-Isasmendi (who also had a hand in the screenplay) and shot in beautiful widescreen by Juan Gelpi, it was filmed in Spain particularly around Almeria which gives the desert scenery a very spaghetti western feel (along with a host of familiar voices dubbing the European actors). The shots of Las Vegas & Los Angeles (including a nifty sequence at Angels Flight) were done separately with none of the principal actors (and most of it done in obvious rear-projection). The Las Vegas footage is spectacular with glorious views of a pre-theme park Vegas complete with marquees hyping Juliet Prowse in Sweet Charity at Ceasars, Dean Martin in the Copa Room, Jimmy Durante at The Desert Inn, and topless revues at The Sahara all followed by a steak dinner at Mr. Porterhouse.

Gary Lockwood was in the midst of a great run in this period including 2001: A SPACE ODESSEY (1968), MODEL SHOP (1968), and the underrated western FIRECREEK (1968). A handsome brooding actor, even when playing a decent guy he always seemed to have a sullen intensity smoldering underneath.  In his scenes with Elke Sommer (here improbably playing an American but who the heck cares its Elke Sommer) there's a vague hinting of S&M in their relationship and one gets the feeling there's something more (or less) than love going on here. Through the film, it is left vague as to whether Tony is simply using her in order to get close to Skorsky.

It's odd seeing Palance play a character on the law & order side of things, but this brings am ambiguity to his role as it's always in the back of your mind on his true motives are.  Both him and Lee J. Cobb both were lending their names and faces to various Italian productions at the time and both of them bring some gravity to proceedings as after the initial prison escape it seems to take on a more light-hearted tone but then gets progressively darker. It is pretty cool to see Jean Servais from the all-time classic heist RIFIFI film show up.

The film features a great jazz-tinged soundtrack moving around cool, sexy, and thrilling sounds and is way overdue for a new release. Long unavailable and hard to see except for occasional showings on TCM, this now available on DVD through Warner Archive. 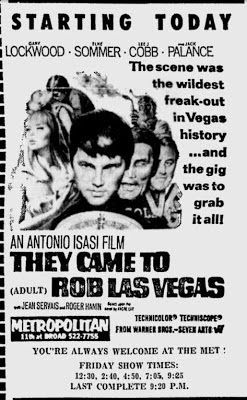 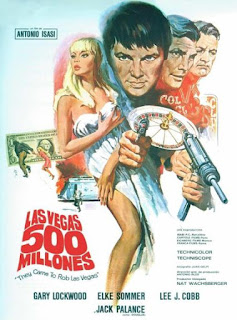 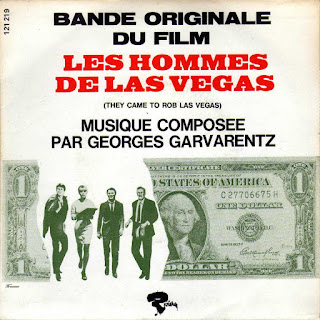 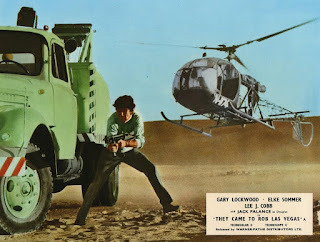 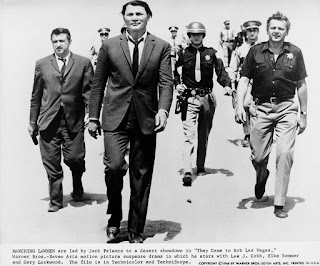 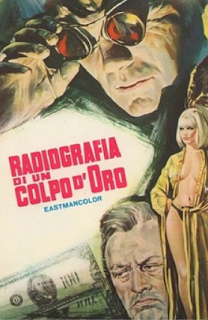 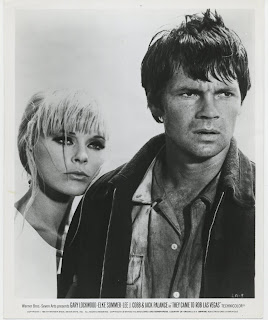