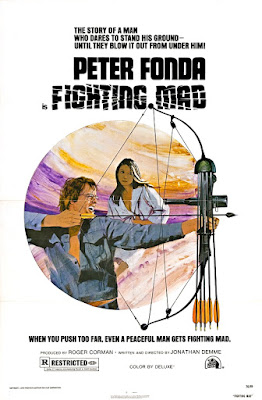 "When You Push Too far, Even A Peaceful Man Gets Fighting Mad" 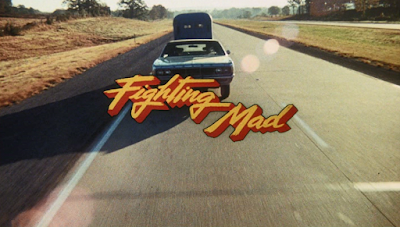 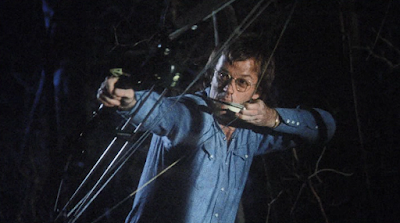 The third of three movies Jonathan Demme (SILENCE OF THE LAMBS) directed for Roger Corman, this followed CAGED HEAT (1974) and CRAZY MAMA (1975). Even though it was written by Demme (along with CAGED  HEAT), FIGHTING MAD had the most "work for hire" feel to it of all his Corman productions. Demme, even in his later work tended to be at his best when he focused on quirky characters and small-town oddballs such as in MELVIN AND HOWARD and in the underrated & unknown CITIZENS BAND. He also always seemed to favor strong female characters which one can see in CAGED HEAT and even in the sometimes silly & wacky CRAZY MAMA.
Part of Corman's deal with 20th Century Fox which meant that Roger had a bit more money than usual for his productions that made for a slicker and bigger looking film (sometimes for the better & sometimes not), FIGHTING MAD mixes in some 70's Whole Earth Catalog ecology along with the then-popular hicksplotation (although here lacking moonshine), revenge such as WALKING TALL and BILLY JACK along with independent salt-of-the-earth folks fighting greedy corporations.
Stoic Tom Hunter (Peter Fonda (THE WILD ANGELS) travels back to his small Arkansas hometown with his young son. Through his monologue to his son, we learn that he's divorced and leaving "the big city" as he hated living there and his wife wouldn't leave with him. Returning to the family farm he finds his father Jeff (John Doucette PATTON) and his brother Charlie (a young Scott Glenn billed here as Scott Glen) engaged in battle with a greedy land developer Pierce Crabtree (TV actor Phillip Carey) who heads up the appropriately named Crabtree Corp. Seemingly wanting to run roughshod over the entire area Crabtree is busy throwing up shopping malls and adding strip mines while forcing the local townsfolk off their land at a fraction of its value while enlisting the help of the corrupt local law enforcement and hired strong-arm goons. 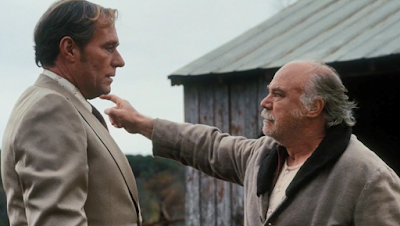 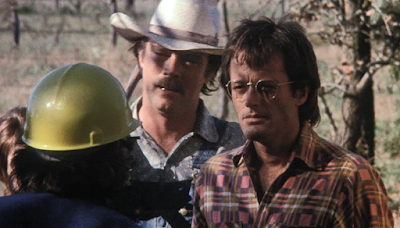 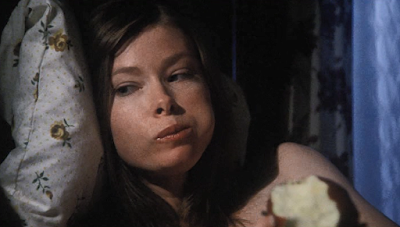 Wasting no time in kicking things into gear Tom is back in town barely one day before his brother and sister-in-law are killed in a fiery car crash after being piled with liquor and he begins a relationship with his old flame Lorene Maddox (Lynn Lowry I DRINK YOUR BLOOD). The spineless & corrupt sheriff (Harry Northup BOXCAR BERTHA) along with Crabtree dismiss the crash as a "drunken accident" and when the shifty realtors show up at the family farm with legal paperwork and a model of the proposed shopping mall they plan to build on the families farmland Tom smashes the model and clobbers the evil realtors with a hoe.
With a film like this, you know what's coming and the way the plot unfolds and the character's motivation and reaction to the unfolding events that make it either work or not. Fonda was always an interesting actor and watching him balance his initial laid-back persona with his later vengeance-seeking righteous-driven character is interesting although the constant brooding and simmering anger go on too long sometimes (along with shots of earthmoving equipment & strip mines). Watching him commandeer a bulldozer to break-up a neighbors house repossession or calmy kill off the land developers in their expansive home with a bow and arrow is loads of fun. Crabtree and his posse of crooks seem to live together in a swanky ultra-modern house with interiors that look to be from a Playboy photoshoot. The bow & arrow is a bit perplexing it does reinforce the back-to-nature wronged man protecting his land and the way of life. The sequences of families being evicted by the developers and the bulldozing of their homes bring to mind the depression era and the WPA photographs of the '30s. As to be expected the action sequences and Fonda "putting it to man" are the best parts of the film.
The film's pacing is kind of choppy and sometimes has trouble keeping consistent pacing. Just when the action starts ramping up Fonda goes into a bar and broods for a while or stops by for a roll in the hay with Lynn Lowry. The secondary characters including Douchette and the young Scott Glenn all bring a sense of grounded realism to their characters and Carey brings an atmosphere of the slimy big businessman (and ultimately thoroughly evil) that make you want to cheer on Fonda's character even more. One of my favorite actresses Lynn Lowry has a rather thankless role here but as usual, brings a wonderful presence to the small role. She also contributes a couple of topless scenes that along with some bloody shootings barely nudge the film into an "R" rating by 1970's standards.
The film bears a close approximation to New World's later BLACK OAK CONSPIRACY from 1977 and that film's producer and writer Jesse Vint would claim that he brought the story idea to New World and they "appropriated" it for FIGHTING MAD. They did later allow Vint to make his film and there is a sameness to the plots although FIGHTING MAD is a better film. 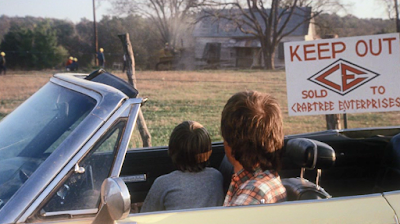 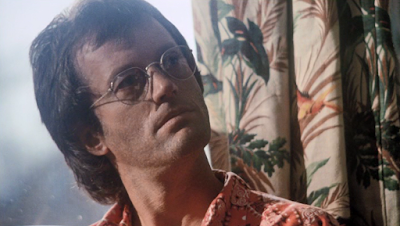 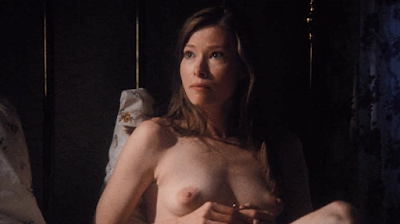 As mentioned before because this was one of Corman's films made in conjunction with Fox there's more of a feeling of "bigness" to the film including helicopter shots, a larger cast, and the use of actual Arkansas locations that work much better than the usual So. Cal. locations for New World films.
The schizophrenic music score by longtime Fonda friend and collaborator Bruce Langhorne is all over the map with banjo themed moments for the family and farm scenes and a jarring electronic score for the action sequences. There's also the classic plaintive harmonica the pops up every time somebody dies that we care about.
Not a great movie but a film that does what it's supposed to do and thanks to Fonda's performance which brings quiet simmering anger to the character rather than the over-the-top bloody revenge that's the usual hallmark of these films.
Available on DVD from Shout Factory with Charles S. Duplin's interesting MOVING VIOLATION which has a rare leading man and nice guy role for Stephen Mchattie and the always welcome Kay Lenz. 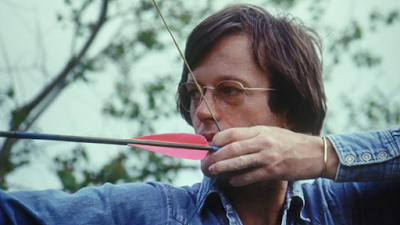 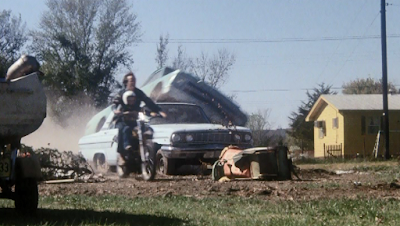 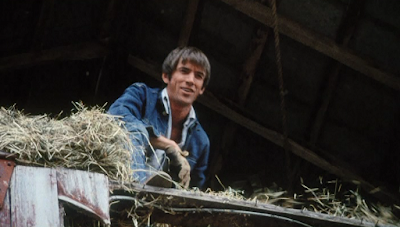 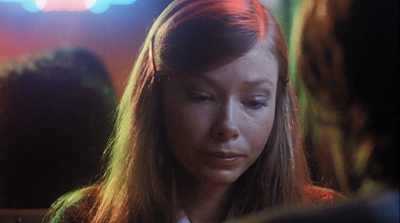 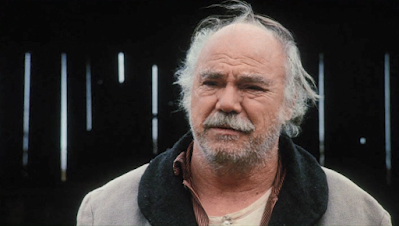 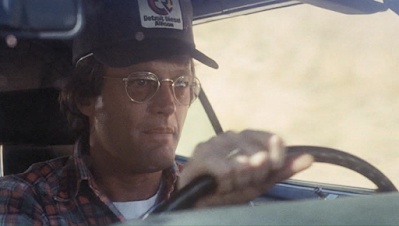 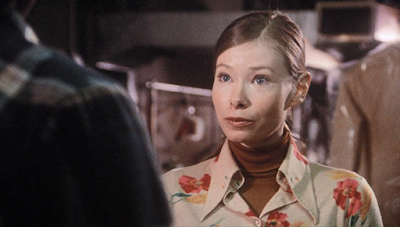 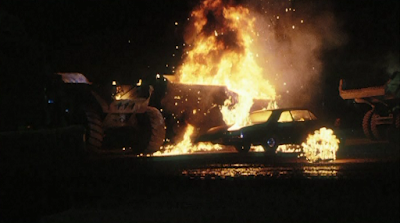 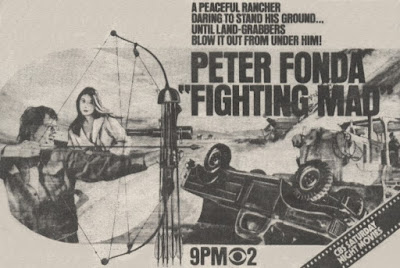 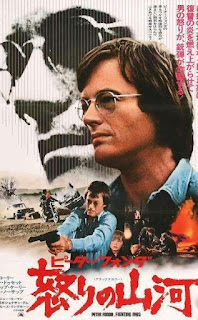 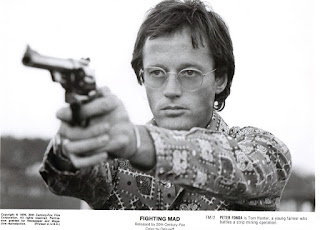 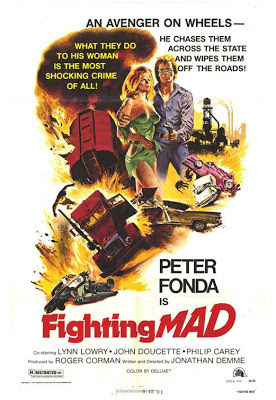