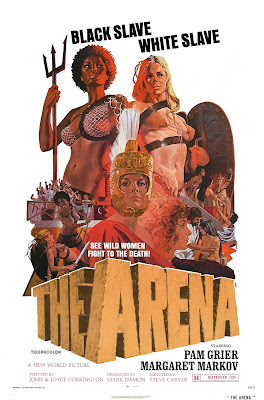 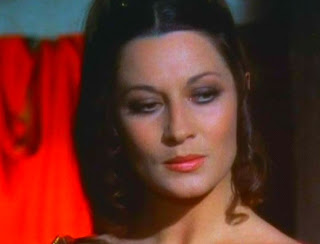 After doing the W.I.P. thing in the Philippines Roger Corman decided to move the basic premise (nudity, violence, exotic locale, rampaging women convicts & more nudity) to ancient Rome and in 1974 sent director Steve Carver off to Italy (along with Philippine exploitation vets Pam Grier & Margret Markov from Black Mama White Mama) to make The Arena. Women captives are forced to train as gladiators and fight alongside men until the old thumbs up / thumbs down decides their fate, until one day in their barracks the girls stage a huge food fight which gives the Romans an idea and soon we've got woman against woman (which seems to get the Romans pretty excited).
Carver even works in an ancient Rome version of the classic & oft repeated women in prison shower scene and although on a Roger Corman budget he manages to create a pretty epic (although underpopulated) feel to the movie. Channeling Woody Strode from Spartacus, Pam Grier looks fabulous as a gladiator and gets to do a pretty wild go go dance at an orgy while wearing a bikini made out of feathers (before which she was carried into the orgy in a huge gold birdcage). Also starring Paul Muller with whom Rosalba had worked previously with in 1971's Lady Frankenstein and producer Mark Damon had shared some screen time with her in The Devil's Wedding Night from 1973.

Roman version of the women behind bars shower
(with Rosalba supervising)

Rosalba (6th billed here under her Sara Bay pseudonym) plays Cornelia who acts as the evil overseer/matron to the girls and even gets to participate in the climatic Spartacus on a Corman budget slave revolt where she's killed by Pam. She would retire in 1976, so her career was winding down by this time - but as usual she has an excellent presence here (even if her swordplay is a bit weak) and looks great eagerly giving the thumbs down to wounded gladiators. Plus anytime you get Rosalba and Pam Grier together in the same movie, that's pretty exciting.
Shout Factory released this as part of their Lethal Ladies 2 collection (which also includes Fly Me & Cover Girl Models). They even added a few scenes that were originally cut from the original New World release to tighten up the running time (one of them involving Rosalba), plus there's a commentary from director Steve Carver and a featurette containing interviews with Corman, producer Mark Damon, Carver and co-star Margret Markov.
Joe Dante was the editor on this and more then likely also cut the trailer (which means that unfortunately this being set in ancient Rome, he couldn't use that exploding helicopter footage that shows up in every other New World Trailer from the 70's). Mark Damon & Margaret Markov were married after meeting on the set here, and remain a happy couple to this day. 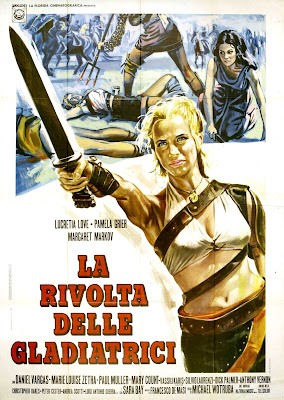