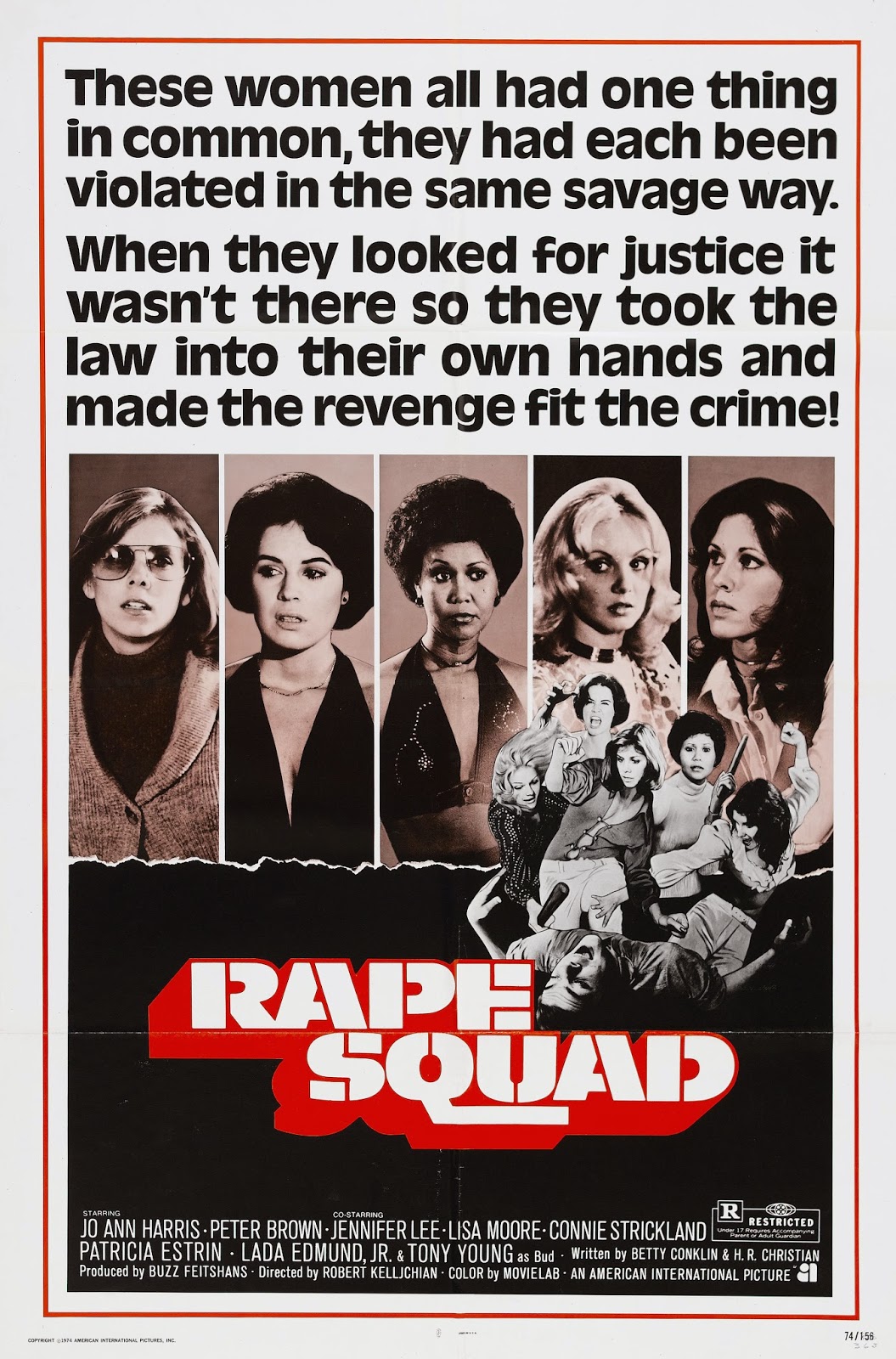 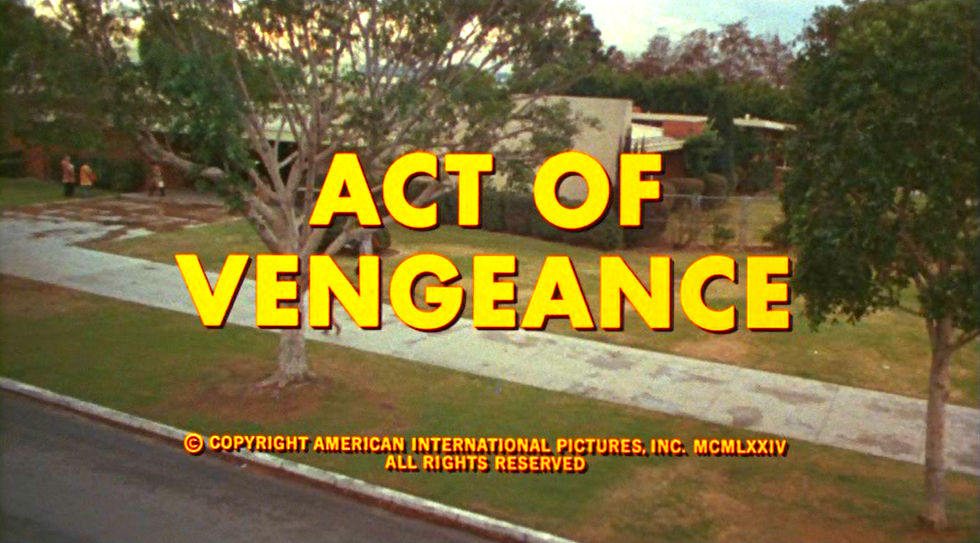 One of the more schizophrenic 70's films 1974's ACT OF VENGEANCE was originally released under the title RAPE SQUAD until at some point during a subsequent re-release it was re-tilted (and it's this title sequence that the MGM MOD DVD uses). Fitting into the 70's rape revenge genre (with  perhaps a bit of urban action/revenge) its a somewhat hard movie to get straight in ones mind and frankly I was surprised that MGM even released this on MOD. Although on one hand it does try to present in serious tones the humiliation and degradation of rape it mostly confines these to the aftermath of the crime with the victims humiliation at the hands of the police, while the attacks though violently staged are filmed in a seemingly titillating fashion which makes it hard to decide ones feeling about watching them (not to mention what the filmmakers intentions were) and to top it all off there's even some oddly placed humor injected into the proceedings.
Pretty and spunky Linda (Jo Ann Harris) is part time student and lunch truck operator with a somewhat lunk headed boyfriend (Steve Kanaly from DILLINGER). One night she is brutally attacked and raped by an orange jumpsuit & hockey mask clad protagonist who forces her to sing "Jingle Bells". After the attack Linda endures a humiliating interview session with the police (along with a doctors examination) and breaks up with her uncaring boyfriend. Later she's called back to the police dept. for a line-up (which seems to go against every known police procedural) and meets other victims of the attacker including Nancy (Jennifer Lee), Karen (Lisa Moore HARRAD SUMMER), Teresa (Connie Strickland THE CENTERFOLD GIRLS and Angie (Patricia Estrin).  Later meeting back in Linda's apt. (and reading an article in Cosmopolitan) they decide to form a "rape squad" to help victims dealing with the police and go after known rapist who have slipped through the legal cracks. 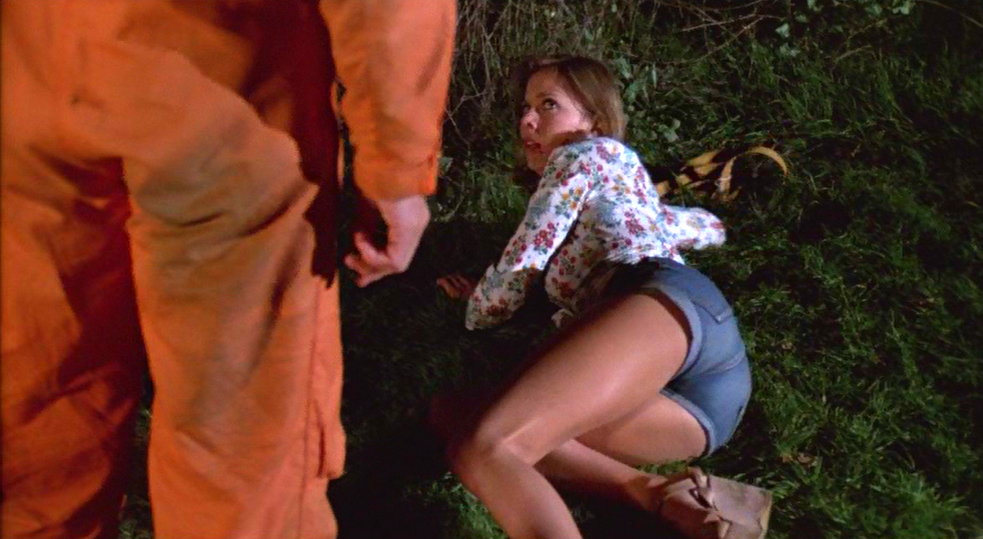 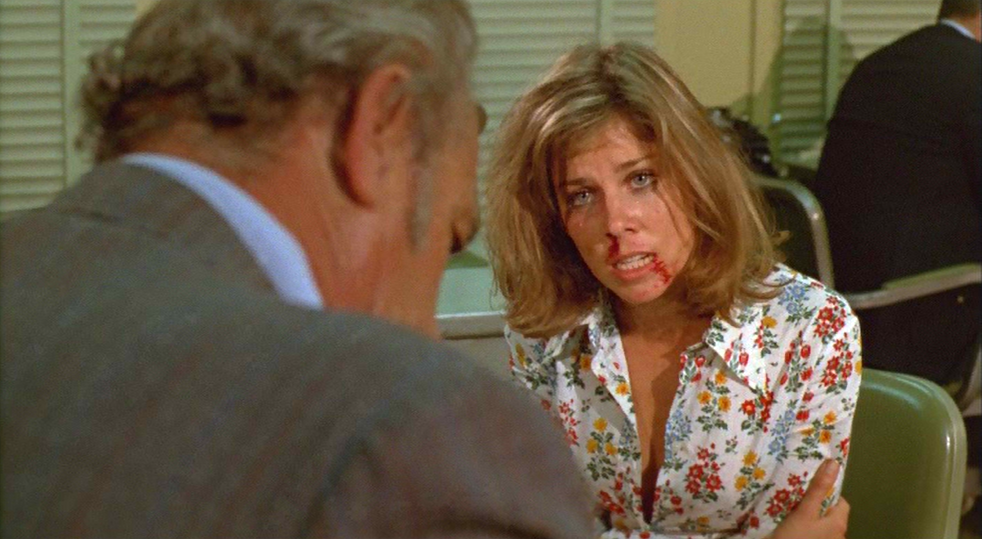 As a means to this end they attend self defense classes given by tanned & blonde Tiny (Lada Edmonds Jr. from SAVAGE !) who teaches them the fine art self defense which specializes in hits to the man's crotch with a hunk of metal. After holding a group meeting while naked in a hot tub (!) they then proceed to start their crusade which includes distributing flyers about town, shouting down insensitive men and best of all going after various low life scum who have by one way or another have evaded justice. All the while this planning and meeting is going on the group is observed by the rapist who is played by veteran TV western actor Peter Brown. As he observes them he narrates into a tape recorder (which he refers to as "Diary of a Champ") and plans for a return engagement with all the past victims at once.
Tooling around town in Linda's VW bus the group first goes after low budget lounge lizard Bud (Tony Young SUPERCHICK) whom Linda hooks up with at a bar and later luring him back to his apt. (complete with a really impressive pyramid constructed of empty Bud cans) she resists his overtures and then calls in the rest of the gang so Tiny can beat the crap out of him, while the rest of the girls trash his apt. and end up by pouring blue ink over his privates ("to mark him") which they had originally told him was sulfuric acid. 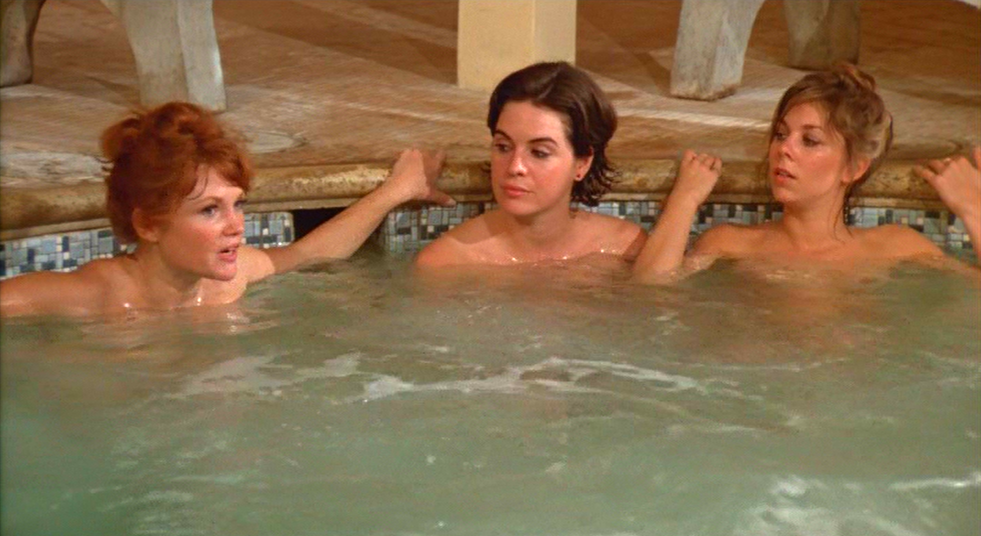 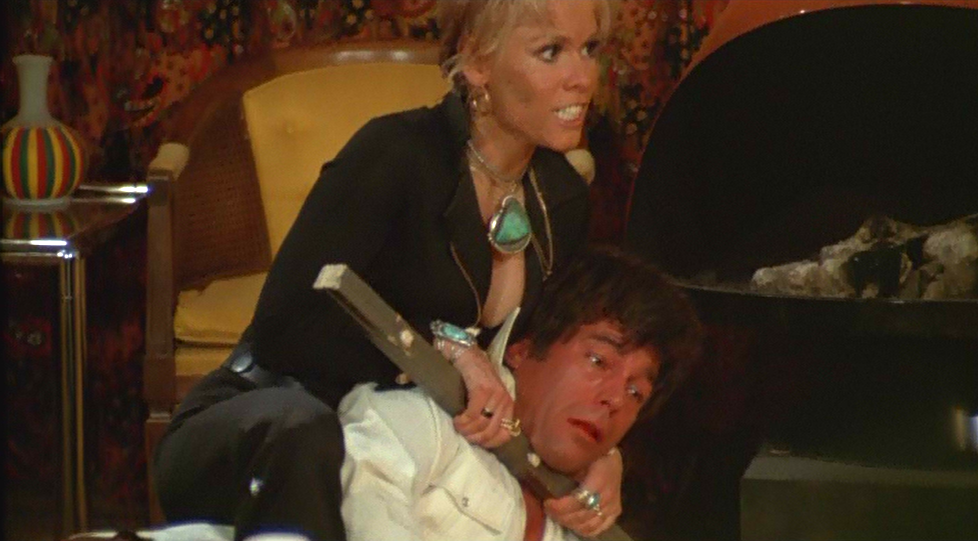 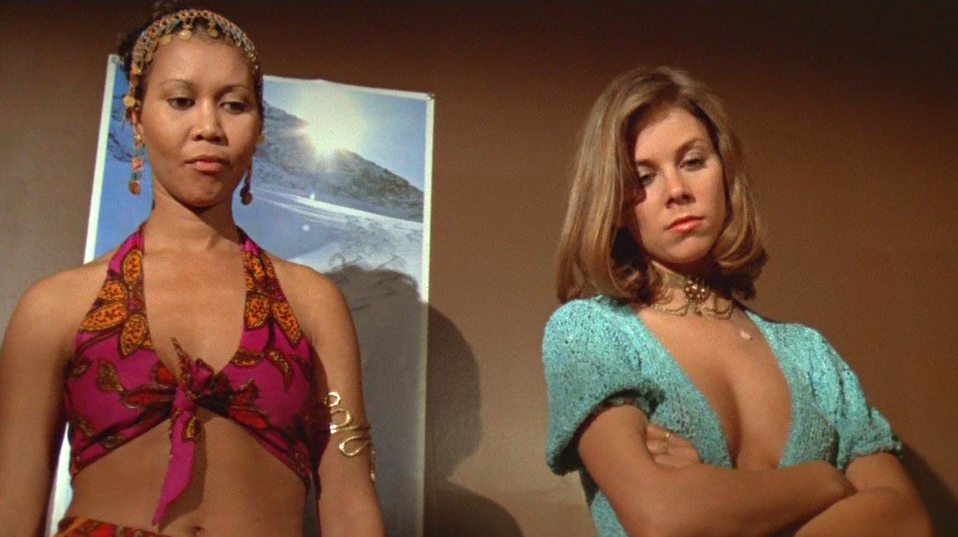 Later targets include obscene phone caller "Foul Mouth" Bernie (well known comedy character actor Stanley Adams) and in one the more bizarre sequences pimp "Pimping Percy" (Jay Fletcher FOXY BROWN) who is laid out on the hood of his Cadillac after hitting one of his prostitutes. Whether intentionally or not this scene is played out with some out of left field humor with the ladies all piling out of Linda's VW and freezing (you expect them to yell out "Rape Squad !") and Tiny's kung-fu(ing) of the pimp looking like something out of a Warner Bros. cartoon. The movie's climax finds Linda and her cohorts (who suddenly work together with all the logic of The Three Stooges) at the mercy of the rapist at an abandoned zoo.
With the proliferation of familiar 70's TV faces the film seems to play out like a made for TV movie with the rape sequences bringing it jarringly back to the grindhouse. At the beginning Jo Ann Harris (who was excellent in Clint Eastwood's THE BEGUILED) seems to be main character focus of the plot, but she drifts into the background for the majority of the movie - which is a shame as she obviously has the best acting chops here. It's kind of weird seeing Peter Brown (who was a regular on T.V.'s  LAREDO) as the gleefully sadistic megalomaniac rapist (and you wonder what made him think of this in terms of a career move). 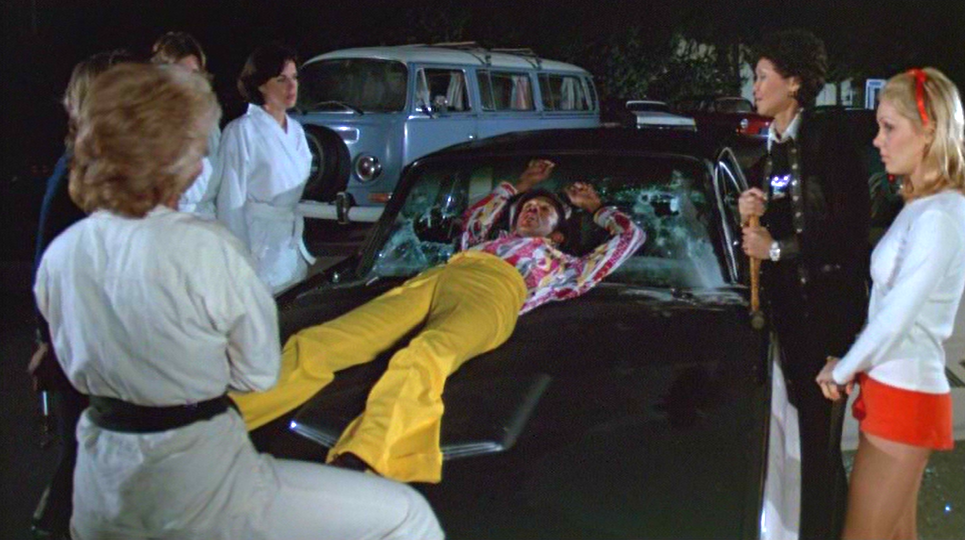 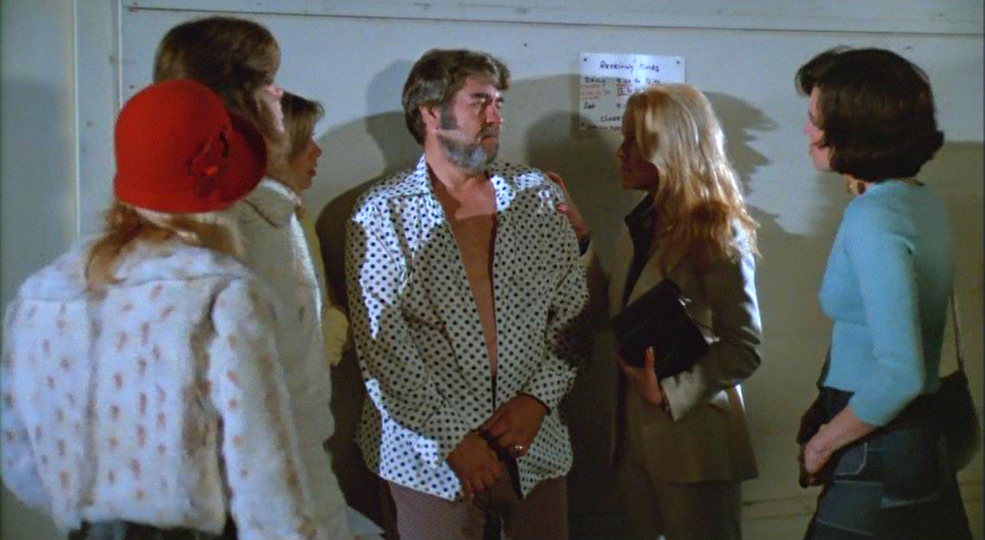 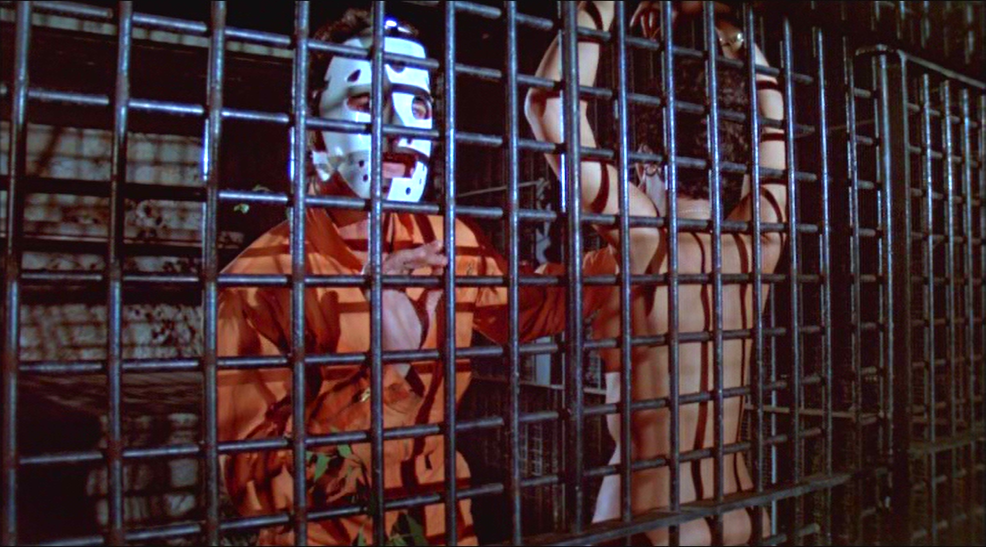 It's a shame that Lada Edmonds never had a bigger career as she has a great screen presence here and had earlier made a great team opposite Carol Speed in Cirio H. Stantiago's Filipino actioner SAVAGE ! from 1973. Directed by Bob (COUNT YORGA) Kelljan ACT OF VENGEANCE was produced by A.I.P. and at some point was re-titled from RAPE SQUAD (as maybe even in the 70's slathering RAPE SQUAD upon theatre marquees was not considered a hot idea). It's available on DVD via MGM's MOD program with a cover featuring Jo Ann Harris's face superimposed over an explosion (??). 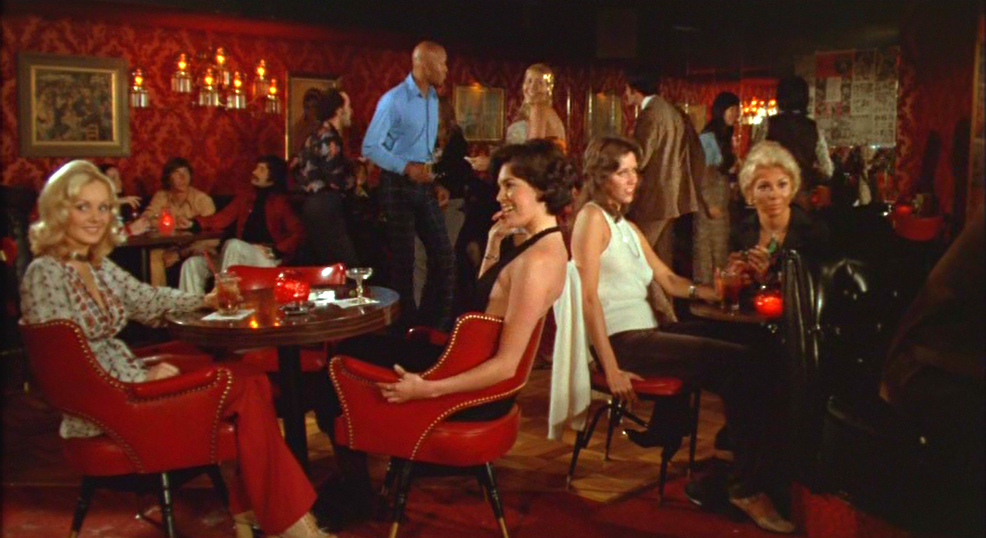 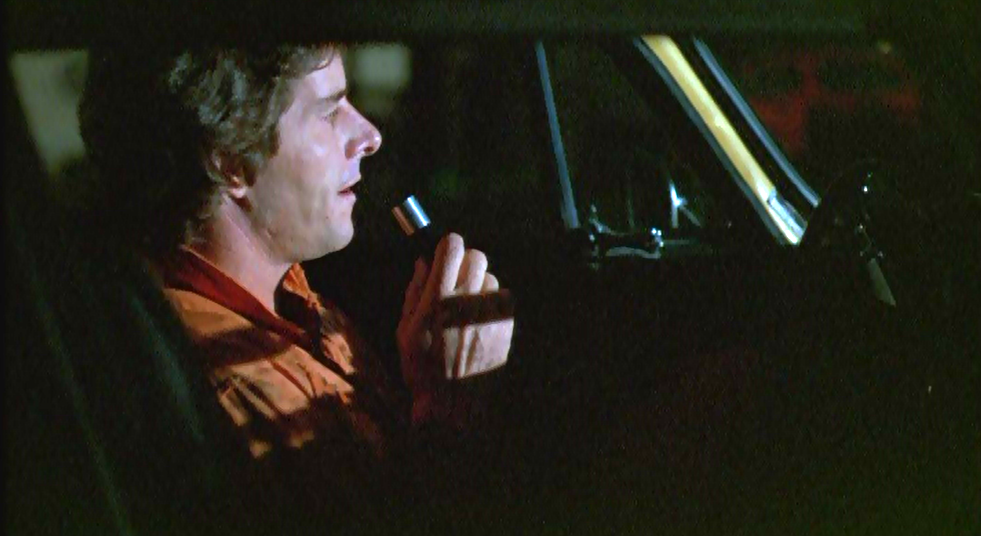 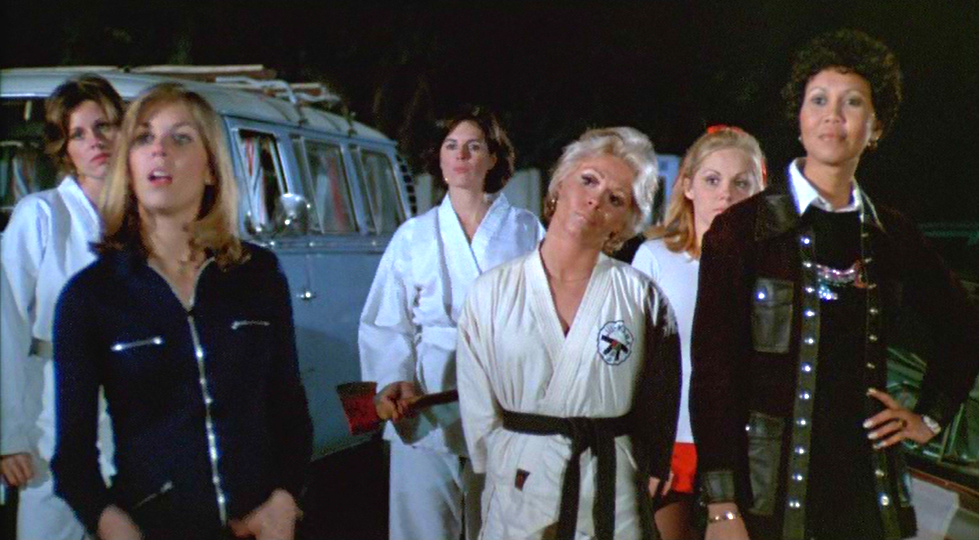 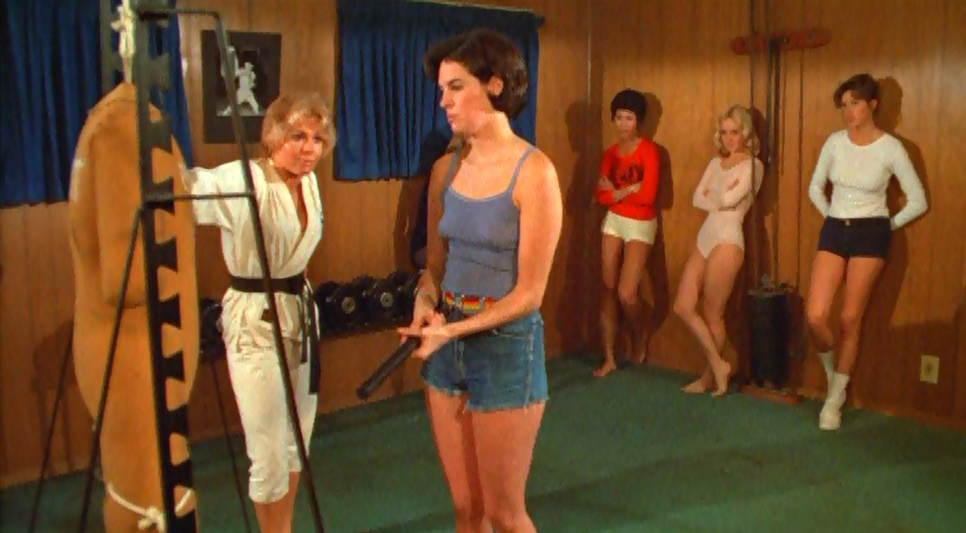 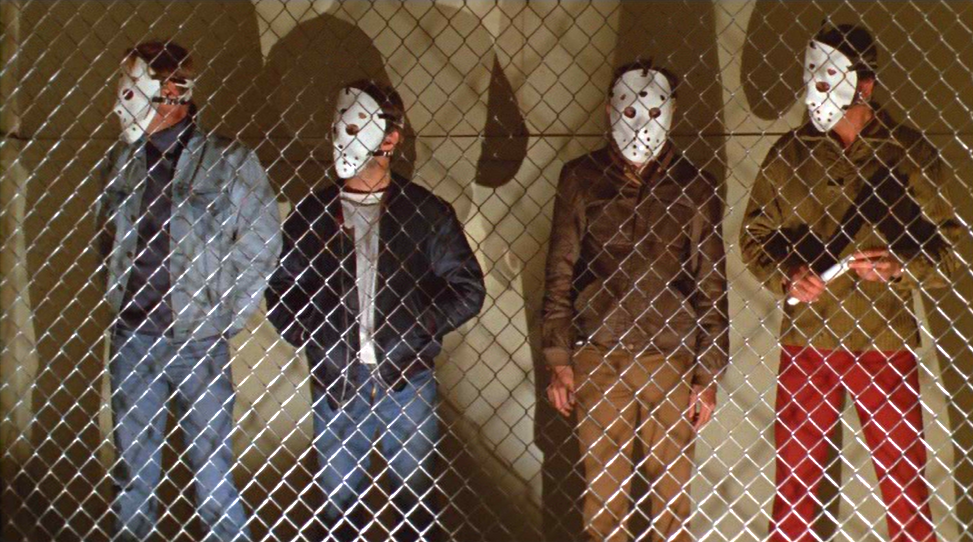 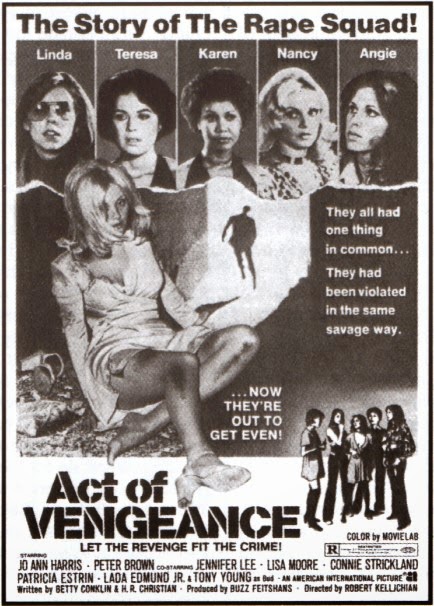 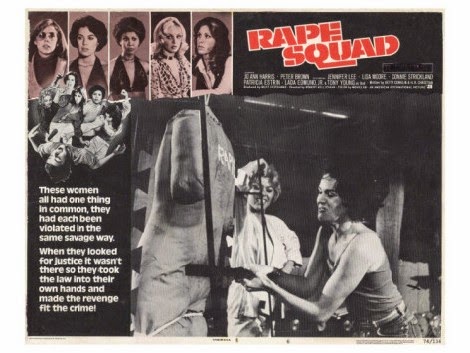